Second of December, was declared International Day of Disabled Persons by the United Nations. To mark this, the Hong Kong Government and relevant organizations put on a 9-day event called International Festival of Inclusive Arts. (Evelyn Glennie came and performed in the Festival.)

As many as 11,000 participants gathered on both sides of Victoria Harbour and beat drums together for the Festival's Opening Ceremony. It was the largest recorded group drumming event in the world and was entered in the Guiness Book of World Records. 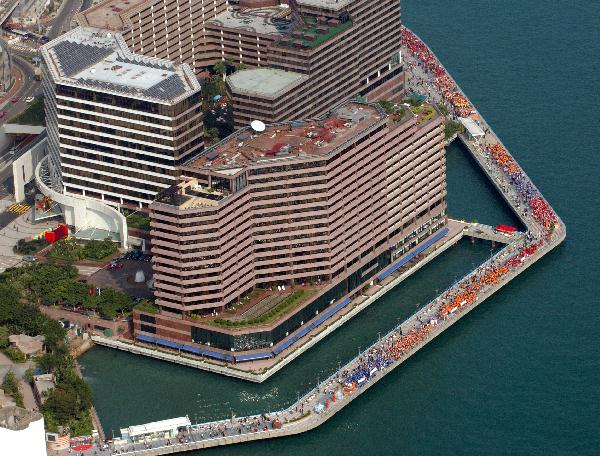 Our Hong Kong Drum Jam group (37 of us, including special-needs children and elderly) officially joined this drum extravaganza. We played reusable plastic water bottles provided by the organizers - 5-gallon bass drums, 5-litre middle-pitch drums and 500-ml beans-in-a-bottle shaker drum, all colorfully decorated. We played a 10-min piece called "The Earth Shall Move" which was composed by the HK Chinese Orchestra, who also played with us. 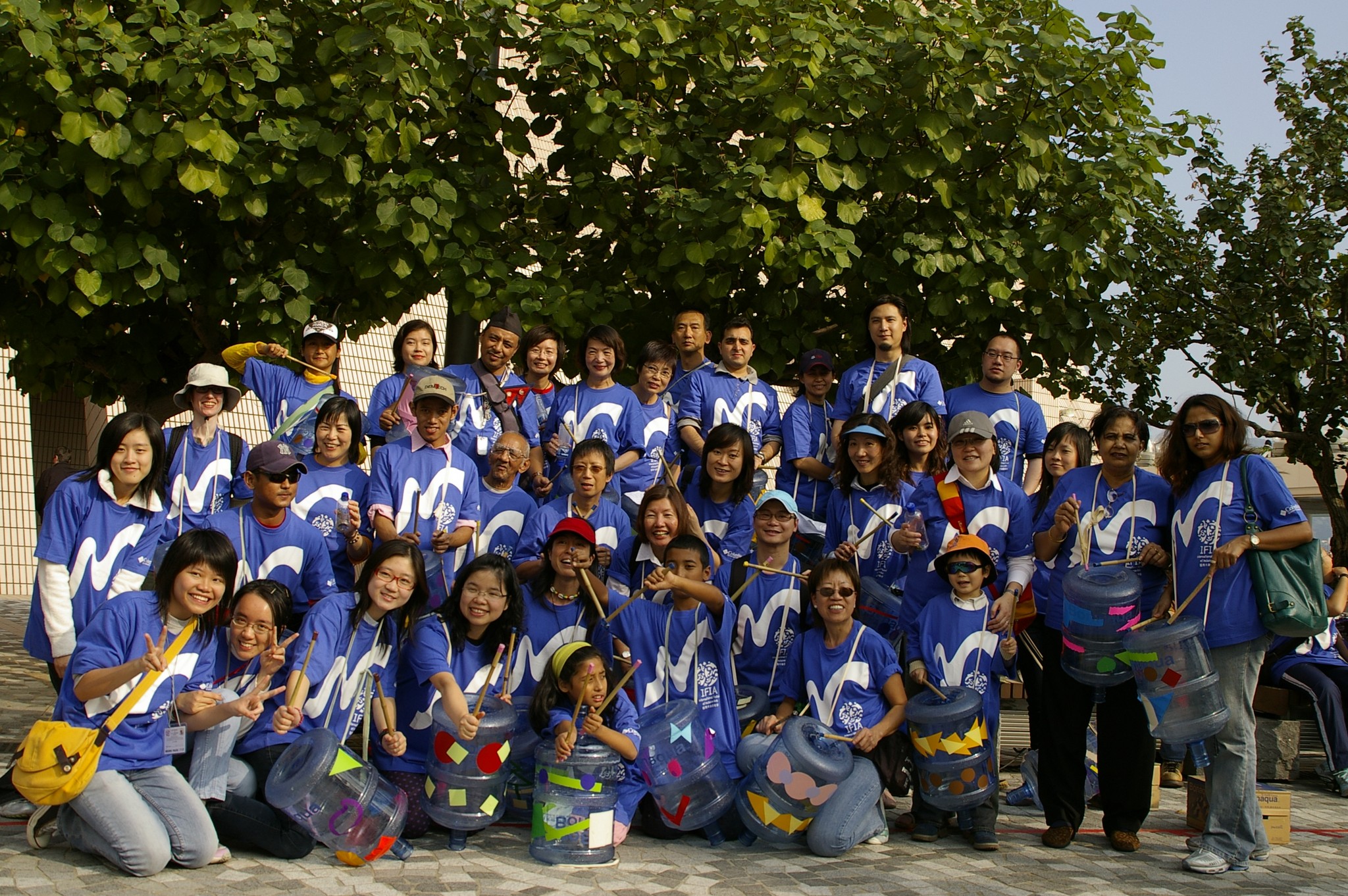 Although a tutorial VCD and music score sheets were distributed well before the event, I saw some were not so confident in following the music. I therefore suggested to our group that notation and accuracy were a less important to this huge ensemble than the fact that we were playing with 11,000 people for a good cause, and together giving out to the world our positive energy and healthy vibrations. "Yeah!" the smiley faces replied and our spirits lifted. 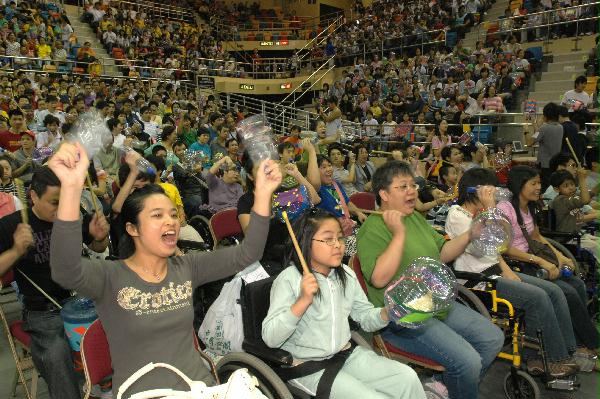 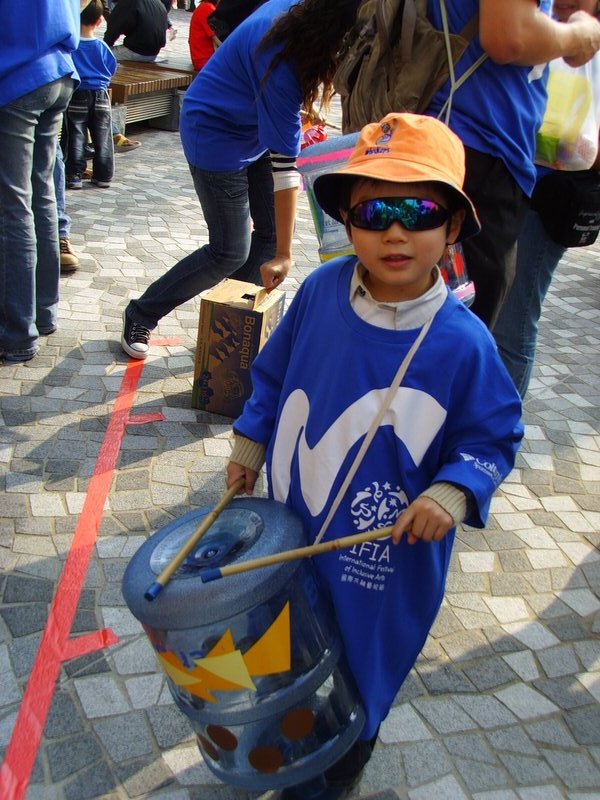 In the beautiful blue sky helicopters flew high above us and we all waved with our drum sticks and shouted to them. Our group was placed next to a group of wheel-chaired adults. From children to elderly, abled and disabled, together we were all as excited and happy and all became children. 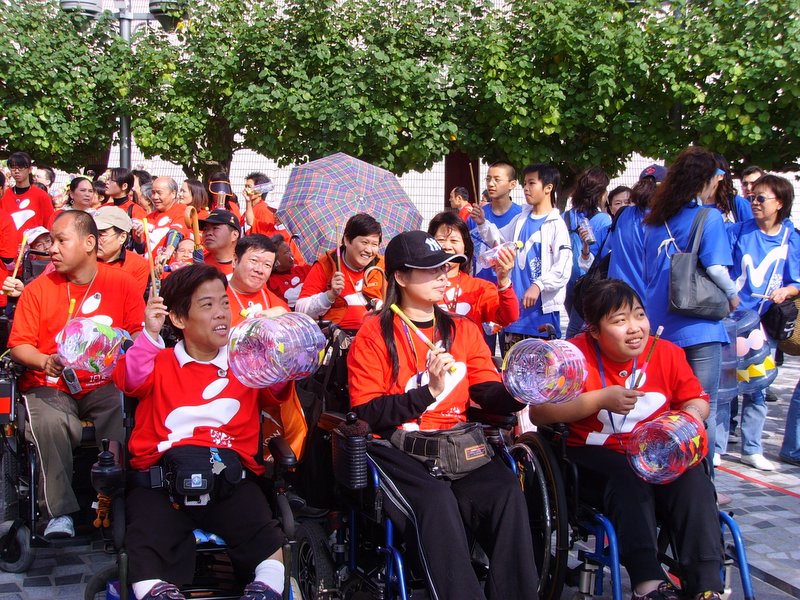 After some minutes of silence we started to play. Wow! The sound was massive and so dynamic! Everyone played their part joyfully. The song finished with our last big shout: "Hey!" It was certainly very moving.

I am glad to have been one of the 11,000 drummers and to have had the opportunity to experience the power of oneness and to share my rhythmical spirit on this scale.

After the event we asked the organizer where to return the instruments and they said ''please take them home". Everyone in my group looked at me, thinking exactly the same thing! The organizer said they would be very happy if I took what was left behind. Now, how many thousands did I say? ☺

I called my roadie to discuss the possibility, but in the end we decided not to take them. After all, we are living in limited-space-only Hong Kong. My warehouse is a way full of drums!