A Winning Beat, Susan Komen Race for the Cure and Pink Warrior Drums

Every once in a while something special and unexpected happens to make a really great thing even better.  That is what happened at the Susan B. Komen Race for the Cure, Phoenix, as the Pink Warrior Drums and drummers added their spirit and beat to this wonderful event.  A field of 37,000 participants had their spirits lifted and they stepped a little lighter as they ran, raced and walked for the cure. The racers knew that something special was afoot as they entered the main entry point and heard the pulsating beats of the Pink Warrior Drums.  Scores and scores of the racers stopped to play the drums (thus becoming a Pink Drum Warrior), dance and shake it up with each other.  Smiles were everywhere as different people took turns sharing rhythms and making great grooves.   Rick Boone, spouse of a cancer survivor, drummed with his two daughters in support of his wife.  Rick said, “This is really a great new happening at the race and adds so much!”  Joy Glaser, a cancer survivor for nearly two decades, was ecstatic as she happily led others in an outpouring of rhythmic fun. Joy, says that being able to make music on the “Pink Warrior Drums” was an incredible experience. 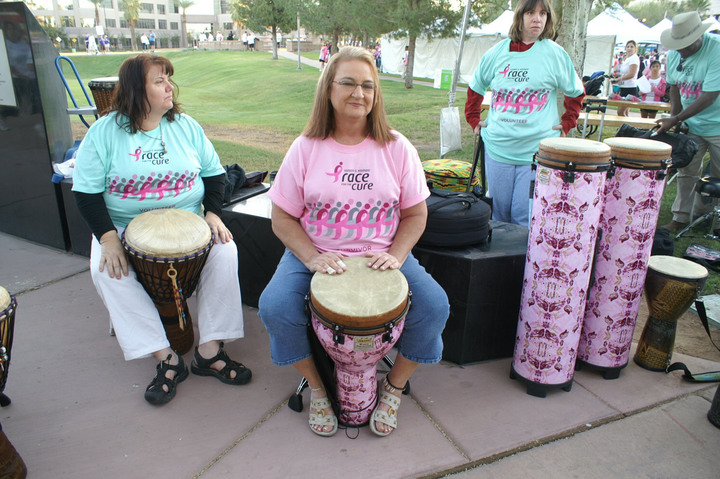 The Pink Warrior Drums were made by REMO Drum Company and sponsored by the Ford Foundation.  Frank Thompson of the AZ Rhythm Connection facilitated the groove and kept the excitement going as the happy participants played and jammed together at the beginning and end of the race. 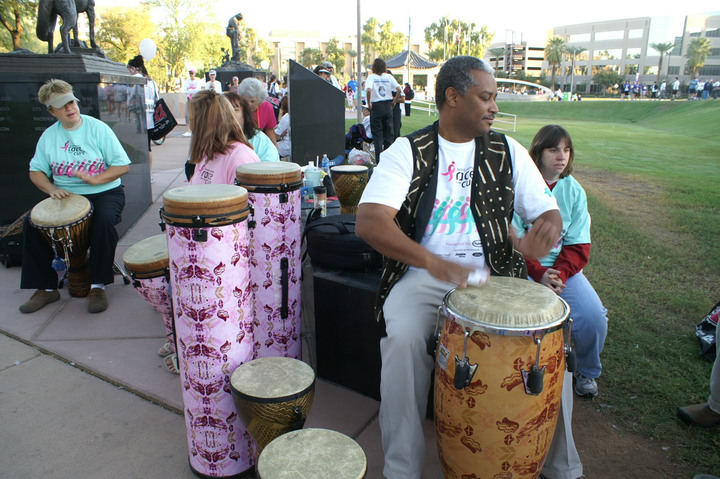 Kirstin Peterson, a local Board Certified Music Therapist who was mesmerized by the design of the drums after viewing them on the Ford Foundation web site, made it a point to attend the race just to be able to play them. 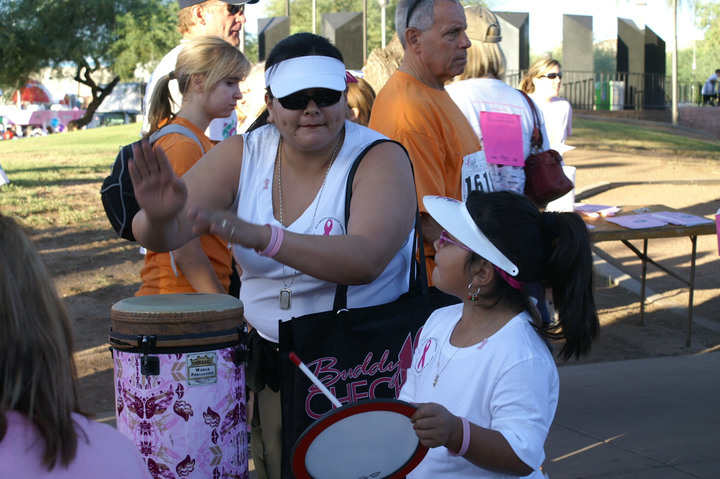 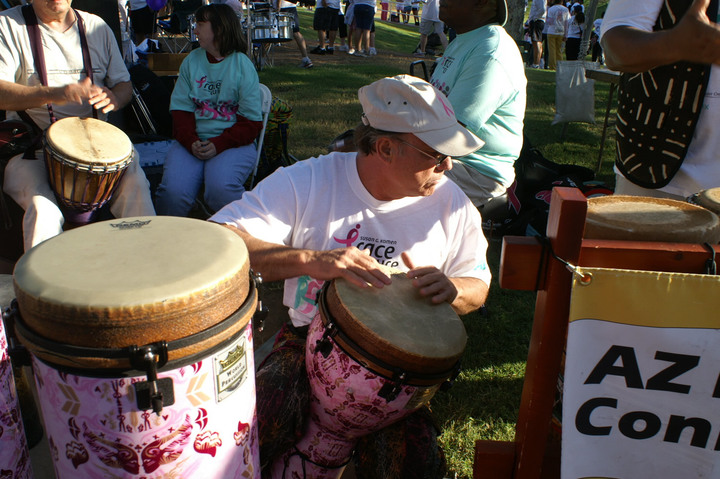 The Ford Foundation also distributed matching scarves which adorned many of the runners and walkers. The Pink Warrior spirit was visible everywhere. 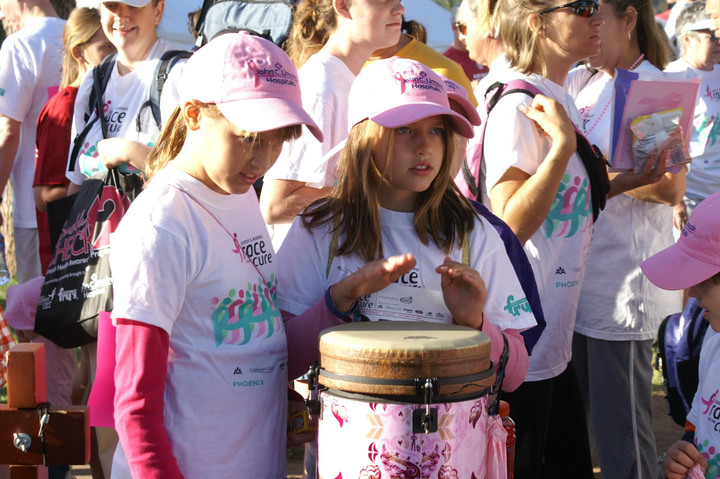 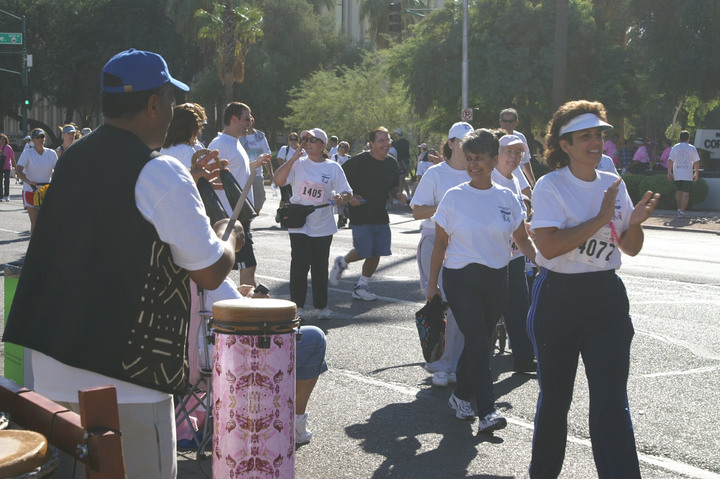 High-fives and happy steps were everywhere.  A glowing grin was on many a runner’s face as they glanced at the drummers and nodded a heartfelt thank you for adding an exuberant crescendo to the end of the race. Geri White, a long time runner in the race had a unique surprise as she approached the finish line. Her support team had transformed itself into a full blown percussion section by playing REMO tambourines and shakers as the runners crossed the finished. 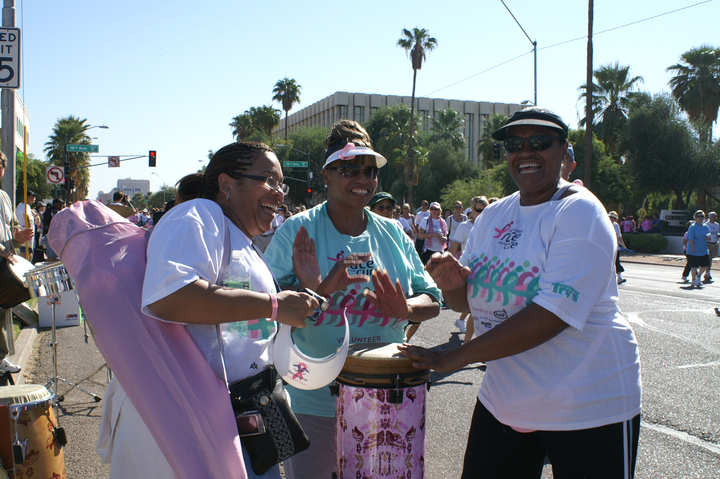 Heather Roberts, Race Manager, says, the drumming, added a great celebration atmosphere to the Race and that she is looking forward to having the drums next year! This year’s Race was the most successful to date-- raising an estimated $2 million!

And the beat goes on…After such a big success, the AZ Rhythm Connection was invited to add drumming to the “Breast Cancer 3-Day Race for the Cure”-- a supplemental race that draws an additional 4500 who walk for three days in support of the cure.

A winning and loving beat was added by all of those who shared there spirit and gifts by playing and supporting the Pink Warrior Drummers! Thanks to the Ford Foundation and REMO Drums!

AZ Rhythm Connection has been rhythmically supporting the Race for the Cure for two years, the addition of the Ford Foundation and REMO Pink Warrior Drummers was just the perfect inspirational addition to this important event.