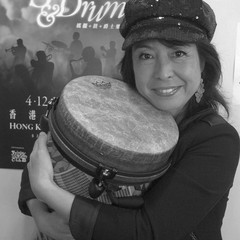 Kumi Masunaga is a professional percussionist, hand-drum tutor, and founding director and leading facilitator of Drum Jam (www.drum-jam.com). As a native of Japan, Kumi has been leading drum circles in Hong Kong and Asia for over fifteen years delivering a wealth of experience and boundless enthusiasm to each programme. Kumi also performs as a solo artist, as a music director, and works in several performing troupes.

• RTHK documentary “Arts on the Street” about Kumi’s travels in Africa which received a Silver Award at the Chicago International Film Festival in 2003.

“I have attended and even organized numerous teambuilding workshops before and this is surely one of the best and happiest programmes ever!” – Ash Wong, Manulife

“Kumi is a great representation of someone taking the facilitated drum circle concept into a county and culture and with patience and perseverance created a recreational drumming movement and drumming community.” – Arthur Hull