They have a sensitivity to sound and poor social interaction skills. I feel the most important thing in working with autistic kids is to meet them where they are. In their world, they are totally alone.

I noticed him as I was bringing the drums into the room where the rhythm therapy session was going to be held. There was a boy running on his tiptoes up and down the long corridors of the buildings, shrieking and making all sorts of noise. He would occasionally stop and gesticulate with his arms. This seemed to provide him with the auto-stimulation he needed. He looked about 10 years old and I tried to talk to him. I saw that he could not talk and that he had difficulties communicating. His parents were following him but they also appeared to have problems restraining and coping with him. They later told me that he communicated with no one and that it was almost impossible to focus his attention on anything for more than a few seconds. They also apologized to me in advance that they probably would not be able to remain in the drum circle, since Danny would not be able to focus for more than a minute. I told them not to worry and started preparing for the rhythm session. When all the children gathered with their parents, I arranged them in a circle and gave them a drum each.

The smaller children sat with their parents while the older children had their own chairs. There was one empty seat and someone was obviously missing. I looked around and saw that my friend, Danny, was missing. I then saw his father dragging him by the hand, and he was pulling away. I waited for them to sit down. Danny sat on his father’s knee and there was a huge drum in front of them. It seemed as though the boy was not going to be able to sit still for very long, but things changed radically.

This happened when I began to show different exercises with one hand and then with the other, and the children had to follow me. We touched the drums and made rhythmic sounds while I counted from one to four. Danny, who until a few moments before had been running tirelessly up and down the corridors, shrieking at the top of his voice, was now sitting in stunned silence! He was drinking in the information which he was receiving. His father was helping him play the drum and he occasionally took a turn with louder or softer sounds. 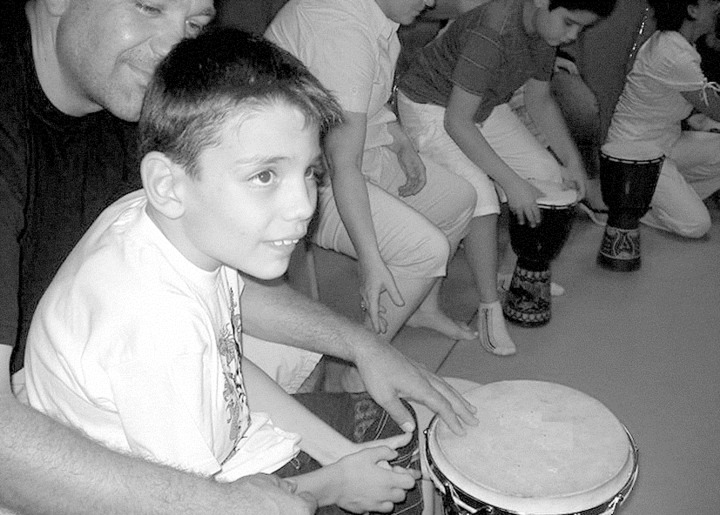 My friend Danny and his father

In this way Danny was communicating with the entire group and having fun at the same time. The father and son remained in the circle to the very end of the rhythm session, which lasted for almost half an hour. His father could not believe what had just happened in front of his very eyes. He could not recognize his son in this light – he was calm, focused and communicative.

The most important thing in this process, in which the father was helping him to play and take part in the group, was that they created a relationship which until that moment had been impossible. Rhythm was that bridge which had crossed the gap between them. Danny’s father had tears of joy and excitement in his eyes.

A few weeks later, Danny began to come to me for individual rhythm therapy sessions. As soon as I opened the door, he smiled and came in. His parents told me that he did not like going anywhere, especially to strange places.

Rhythm had clearly done its job and Danny had grown to like me.

I have always wondered why dolphins and horses have been able to achieve this special link with autistic children, while we “normal” people have difficulties.

This article is part of Martin Ivanov’s book “Rhythm Alchemy: In Search of the Philosopher's Stone”