Australians call someone who is obsessed with music a "muso". Such a person is Andrew Hewitt, who - although physically handicapped - drums enthusiastically: With his "Can Do" attitude he wants to inspire others and founded the platform "Can Do Musos".

Andrew Hewitt suffers from so-called infantile cerebral palsy - movement disorders due to early childhood brain damage. He is sitting in a wheelchair. But that did not stop him from becoming a drummer. He has been drumming for 37 years - more than that: "I play the drums, teach and work as a drumcircle facilitator for Remo," says Hewitt. In addition to Remo, the companies Pearl, Zildjian and Vic Firth support him in his commitment.

Coming from the Australian metropolis Sydney, Hewitt toured already Australia, in the USA, and finally in Germany, where we traded it in Berlin. Together with the "Global Ambassador of Drumming", Dom Famularo, as well as David Segal and Mike Mignogna, Hewitt founded the organization "Can Do Musos" in 2013:

In November 2014, Andrew Hewitt launched "Can Do Radio," a weekly online radio show featuring music by Can Do Musos.

The show can be found as podcast at podomatic.com. On vimeo.com there is also "Can Do Musos TV". Thanks to Hewitt's tireless efforts, the initiative has become a worldwide voice for musicians with disabilities. Currently it supports nearly 300 musicians from 32 countries.

"Andrew is a very special person and artist! His drive and motivation is inspiring! He is committed, enthusiastic and always willing to learn and grow! He is an excellent example of the drive to excel.

I have known Andrew for over 10 years. In 2009 we performed together in Australia and had a full house standing ovation. The audience was lifted by his talent and perseverance.

I remember first seeing Andrew Hewitt at Australia drum weekend a few years back. He had a solo slot playing some tunes one afternoon. I was so impressed by his intense energy and passion to overcome all his obstacles in his quest to make music. It was truly inspiring. I stayed in touch ever since and was very happy to see him help develop Can-Do-Musos. It is such a positive organisation that gives inspiration and support to all those who are thinking of getting into music, regardless of their challenges. 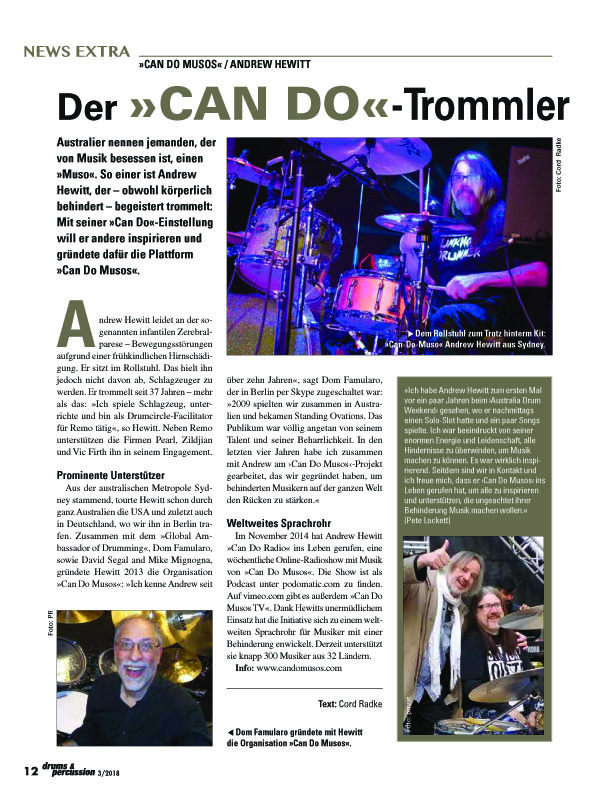