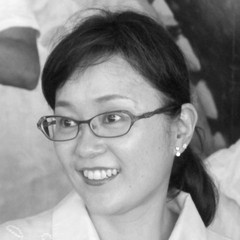 Tomoko ‘Tomtom’ Yokota is based in Matsuyama on the island of Shikoku in Southern Japan. She is a member of Japan Drum Circle Facilitators Association. She is also co-founder of a major drum circle group in Japan, ‘Orange Boom Boom’ (founded in year 2005) with two other leading facilitators, covering the Northern, Central and Southern parts of Japan. As a response to the success and increasing demands for her drum circle work within her local community, Tomtom has founded her own non-profit organization ‘RhythmCafe’ in 2004, delivering joy of music making and working energetically towards building a healthy community. Since 2002, Tomtom has worked with people of all ages, backgrounds and lifestyles both in Japan and internationally, including drumSTRONG ’09, a 27 hour drum-a-thon held in Charlotte, North Carolina. Her work with children has encompassed circles for working mothers and their infants, kindergartens, elementary, junior-high, high school and college students, as well as learning disability classes. Tomtom has organized and facilitated “Drum about Japan” events and Drum Facilitators Playshop Japan with Arthur Hull. She is a Village Music Circles Certified Facilitator. In 2014, she translated and published a Japanese edition of Arthur Hull and Nellie Hill's Drum Circle Facilitator's Handbook.She has completed Remo’s HealthRhythms program and has organized successful drum circles for mental health programs, physically challenged groups, hearing impaired students, elderly and pregnant women at maternity clinics. Tomtom presented the first Asian Facilitators Conference in Port Dixon, Malaysia. Equally adept at facilitating a very small to a large group of two thousand, Tomtom continuously promotes drumming as a means of empowerment, communication and a dynamic force for healing.