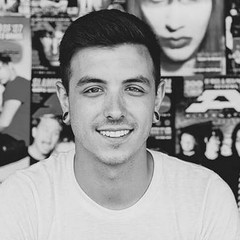 Steve Carey is a drummer from Rockford, IL. Introduced to the drum set at a very young age, Steve developed his basic drumming skills by playing along to the Beatles, Rolling Stones, and Led Zeppelin. Growing up his taste in different styles of music developed and his drumming influences broadened into more than just rock music including jazz, latin, and hip hop. His passion for playing heavier styles of music wouldn't come till later on when he was in his late teens.

Through high school he played in various local bands and developed his live performance. Steve also took jazz/funk/fusion/latin lessons throughout his 4 years of high school from local jazz drummer Jack Brand & internationally known drummer Paul Wertico. Graduating high school in 2007, he attended the University of Illinois in Chicago for a year. After receiving a record contract offer for his band, The Color Morale, he left college in 2008 to begin writing and touring full time.

Since 2009, the band has toured non stop. Sharing the stage with friends in August Burns Red, The Devil Wears Prada, We Came As Romans, and Of Mice & Men, which helped The Color Morale land spots on countless tours in North America, Europe & Australia including multiple music festivals such as South By South West and the European Vans Warped Tour. After seemingly endless touring schedules to support his first and second album with The Color Morale, the band began writing for their third studio album entitled "Know Hope."

This album helped push the band, as well as Carey's drumming style, into a more defined and signature sound of melodic metal. The band developed into a newer sound and the new album helped earn them a spot on many reputable tours across the globe. After a relentless touring cycle and new label signing to Fearless Records, the band has settled down to write their 4th studio album, "Hold On Pain Ends".

Throughout his career so far, Carey has been inspired by many people and musicans he has met on the road. "When a kid comes up to you and says that you've affected his life in a positive way because of something you wrote in your music, it makes you feel like the luckiest person on earth. I've never felt so called to do something or belong somewhere in my entire life. I am VERY privileged to have this in my life. We get to reach out to kids and share our experiences every night of the week. The Color Morale is our attempt at utilizing our gifts and passions to create a family that we can center our lives around together. We are humbled and honored."