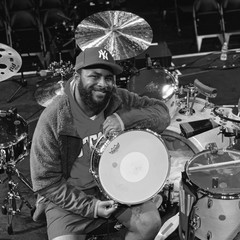 Shajuan Andrews took an early liking to the drums, as a kid growing up in church. Shajuan started working professionally at an early age, being asked to perform for numerous of people and participate in live recordings. He has traveled with the Boys Club of New York and performed at prestigious venues such as: The Rainbow Room, Cipriani's, The Waldolf Astoria, The World’s Famous Apollo Theater, Madison Square Garden and so much more. Shajuan took interest into performing on stage for the rest of his life. At the age 17, he had the privilege to record drums for artist Wale on track 1 titled "The Curse of the Gifted". Shajuan continued striving for success and involved himself around great people. He was granted the opportunity to perform on Live tv at the MTV EMA Awards and Good Morning America. Shajuan has played for artist such as: Jussie Smollett, Kelly Price, Jeff Redd, Big Daddy Kane,Horace Brown, Al B Shure, Donnie McClurkin,Dorinda Clark Cole, Kierra Sheard, Jason Derulo, Rita Ora, Zacardi Cortez, Judacamp,Tasha Cobbs, Swizz Beatz, Tiara Thomas, Sean C and LV and more. Shajuan is currently on tour with Emily King.