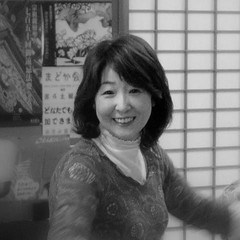 Noriko ‘Nonnon’ Mihara lives and works in Yokohama, Japan. A member of the DCFA (Japan Drum Circle Facilitators Association) who became a board of directors in 2009, she is also co-founder of a major drum circle group in Japan, ‘Orange Boom Boom’ (founded in year 2005) with two other leading facilitators, covering the Northern, Central and Southern parts of Japan. Nonnon founded her own ‘Sendai Drum circle’ in 2003, and has been delivering joy of music and working energetically towards building a healthy community. It's a local group dedicated to producing smiles and building community through rhythms. She moved to Yokohama in 2007, and founded 'Yokohama Drum Circle' with her local DCFs. She organized “Drum about Japan” events with Arthur Hull in Yokohama. She moved to Oosaka in 2012 and founded 'Kansai Drum Circle DeCca' with her local DCFs. Nonnon is such a passionate drum circle facilitator to make everyone happy through rhythms, including people of all ages. Nonnon is an instructor of the Dalcroze methods for eurhythmics, focusing a fusion of drum circle and eurythmics and has had great success in releasing the stress from the children and in their empowerment. Nonnon completed Remo's Health Rhythms® program and organized successful drum circles for mental health program, physically challenged groups, and elderly groups. She has also worked at children in hospitals bringing smiles back on their faces.