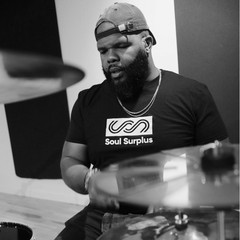 Leonard "Pudge" Tribbett was born May 31, 1980, in Camden, New Jersey to Wilhelmina Tribbett and the late Leonard Tribbett Sr. Having the strong influence from a musical background, and a rich family tradition in music, Leonard was destined to become successful through his musical inclination. It was through his father that "Pudge" as we all know him, began to pick up the sticks to become one with the drums. He recalls sitting on the front row at church watching his father play as one of his earliest memories of his growing passion for the drums.

Leonard began to play drums at the age of 8 and it was at this time that he briefly began lessons in elementary school. By the age of 11 he began to play drums for his middle school jazz band and Woodrow Wilson High School’s Gospel Choir. It was in 1996 when Leonard "Pudge" Tribbett began to play for the Grammy nominated Gospel Group, Tye Tribbett & G.A. and it is with this group that he began to travel across the world sharing his gift and has not looked back. Pudge is widely known for his "TIGHT" pocket style of playing along with his powerful chops. His expressive combinational rhythms are filled with his passion and his Love for the drums and the Power of music.

Leonard has also made numerous television appearances on BET, VH1 Soul, TV One, Comedy Central, NBC10 (which included Saturday Night Live) The Gospel Music Channel and several European Networks. (Which included Later with Jools Holland) Pudge is currently touring with 8x Grammy Award winner Anita Baker as well as doing dates with 2x Grammy Award winner Erica Campbell from the award winning gospel duo Mary Mary. It is through these artist and other opportunities that he continues to soar and expand his musical gifts.

Aside from touring, Pudge continues to increase in his fidelity to the industry by performing clinics/workshops, and producing music. He also serves as the Director of Music & Fine Arts at his church. To add to his musical journey, he recently joined the SPLICE team under the SOULSURPLUS entity, serving as a Content Producer. Leonard "Pudge" Tribbett is the proud husband of Nicole and father to Liam Tribbett and strives to maintain a great foundation in Christian values.