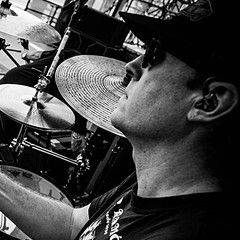 Referring to Josh Freese as "a drummer" is like calling Jimi Hendrix "a guitar player."

It misses the point entirely. Josh was a born a proverbial force of nature. A beat master without equal, the drums are his ho's and like any pimp worth his salt Josh does not go easy on them.

Seriously though, Josh is a family man of unparalleled percussive ability. He was a card-carrying member of the Musicians Union at the age of 12, working as a "PRO" while grumbling about paying taxes to "the man." A few count offs later Josh was able to nail all the twisted beats on all the early DEVO records. In fact, after a career Bar Mitzfa with his band, the Vandals, he eventually took over as Devo's drummer after we had given up over the loss of Alan Myers. He brought us back to life and corrected us when we proved to have forgotten our own arrangements.

That trial by fire was just the beginning for guy who exists in a dimension somewhere between Zelig and Palladin (Have Sticks Will Travel). Like a slight of hand artist Josh could toss off the Devo Energy Dome, bleach his blonde hair blonde and morph into some prog-rock, dark and dirty half-time, with A Perfect Circle. Then while Maynard harvested grapes in his Arizona vineyards Josh grabbed a black Lycra T, plugged-in his earphones and learned a 2 hour NIN set on a red eye to Russia, coming to the rescue of Trent and company. After that Josh needed a "vacation" so he put on his lime green suit with one pink sleeve and recorded his own album back in LA.

Music is Josh's life. This guy is so unreal he can keep it real whether he's pounding the skins for Sting, Guns and Roses, The Offspring, Avril Lavigne, Ween, The Dixie Chicks or the Dwarves. That unlikely grab bag of pop notables represents about 10% of the artists whose sonic missive recordings are driven by Mr. Freese. He appears in more different band's group photos than Jesus or the Devil.

As Andrew Loog Oldham once said "see that blind man, hit him on the head and steal his bread." Then spend it on this jungle drummin', crazy-ass, mo'fo's new record that's been kickin' it since bustin' out of his mama's oven in 1972!