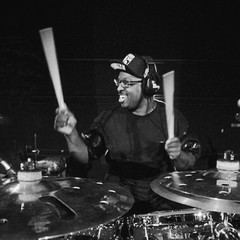 Gerald Heyward's performance resumé reads like a who's who in R & B music. As one of the most sought after drummers in the R&B world, Gerald is constantly in demand.

Considered by many to be the "Godfather" of gospel and R&B drumming, Gerald crossed from the altar to the stage to play with artists such as Blackstreet, Michael Jackson, Janet Jackson, Missy Elliot, Puff Daddy, Brandy, Mary J. Blige and Coolio.