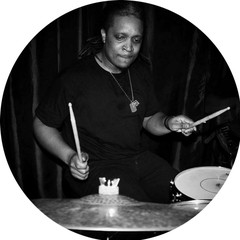 Frank White III was born December 30th 1986 in Jackson, MS to Mr. Frank White Jr. and Ms. Barbara White (Green). He is the youngest of four children and has one sister and two brothers.

Frank White believes that his talent is truly God-given. White is the drummer for The Greater Tree Of Life Baptist Church. He has been playing drums since the age of seven years old. He started playing professionally at the age of ten for Victory Metropolitan Full Gospel Baptist Church.

During the course of his career, he has had the opportunity to be associated with multiple bands in various permanent and freelancing roles such as Grady Champion and the Grady Champion Revue Band, The Ben Shaw Trio, Mike Rob & the 601 band(www.mikerobandthe601band.com),  Terrell Moses & Class Act, Adib Sabir, The Patrick Smith Band, JJ Thames, House of Cards, AJC and the Epushers and an awesome blues singer by the name of Rick Lawson. He also teaches private lessons at Terminal Studios and Class lessons at Cathedral AME Zion Church. Rather it be working as a sub or a regular, Frank has honed his performance, technical and conducting skills and gained competency in combining his musical skills with peers.

Frank’s amazing drum skills have helped him win the Drum Off at Guitar Center in Jackson, MS in 2006, which led him to be flown to Orlando, Florida for the finals. He placed second in Orlando, Florida and continuously thanks God for allowing him to have such an opportunity.

In addition to being an avid live performer, White has logged hours of studio time recording tracks for Adam Collier, Grady Champion, and AJC and the envelope pushers, Terrell Moses and Mo7ive.

One of his goals as a professional musician is to make a name for  himself in the music industry. White proudly endorses Remo, Vic Firth, Cympad, Trutuner, Big Fat Snare Drum, Tuner Fish Lug Locks, Drum Dots, & Soultone Cymbals.