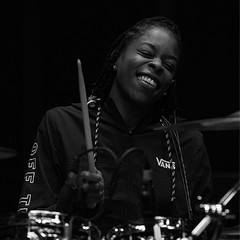 My name is De'Arcus Curry . I am from Jackson Mississippi , born September 23, 1988. I have been playing professionals for 9 years. I’ve played for many artist . I’ve also played for the Grammys .

My first artist was Grammy award winning T-Pain . I’ve toured the world and played with him since 2010. I also play for Grammy nominated Janelle Monae. I grew up around a lot of gospel music and basically grew up in the church. I had a interest in drums when I was younger but it wasn’t really seen much or excepted for women to play, especially in the church . I never knew I would be here today playing drums as a career and for so many great artist.

In 2008 I attended a drum shed in which I was videoed by my cousin . He ended up posting it on YouTube and it got over 170,000 views. I would say that was the start of my drum career . A few years after that I was contacted by Drummer extraordinaries Gerald Heyward and Aaron Spears for a job, which ended up being my first job . I didn’t know who the artist was or much about playing to tracks and clicks until I got to rehearsals and of course it was TPain. At that time , I was a biology major in college on basketball scholarship and decided to take a leap of faith . I knew that the gift I had God gave to me and I wanted to see it through.

I never attended college for music . I picked up playing by ear. I come from a very musical family and started playing drums professionally in 2010.My father is the co founder of the Mississippi Mass Choir. My brother David Curry III who is also a drummer, taught me how to play drums . He plays drums professionally for the Canton Spirituals and the legendary Keith Sweat. My other brother DeQuan Curry is a producer and bassist and my mom Emma Curry sings. Mostly everyone in my family either sings or plays an instrument lol. In 2013 I submitted a video to the very first Hit like a girl international competition . I was awarded the very first hit like a girl champion by judges such as Shellie E.