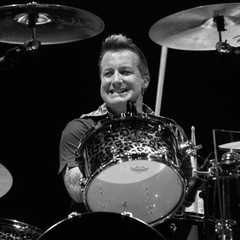 Tré Cool (born December 9, 1972 in Frankfurt, Germany) is one of the most influential musicians on the rock scene today. Tré began playing drums at age 11 and, by age 12, started playing with his first band, The Lookouts. His first drum set was a 63 Ludwig 4 piece kit that came with Remo heads and Zildjian cymbals.

The Lookouts recorded two LPs, One Planet One People and Spy Rock Road, and two EPs, Mendocino Homeland and IV which Billie Joe From Green Day played on, all released on Larry Livermore's own label, Lookout! Records. One Planet One People was the first release in the label's history. In mid-1990, The Lookouts went into a period of inactivity, with the members living and studying in different locations. It was during this time that fellow Berkeley band Green Day asked Tré to join them, following the departure of their original drummer.

Since then Tré has gone on to record 7 albums with Green Day, including: Kerplunk, Dookie, Insomniac, Nimrod, Warning, American Idiot, and 21st Century Breakdown. The band has since won 3 Grammy awards.  Best Alternative Music Album: Dookie; Best Rock Album: American Idiot; and Record of the Year: American Idiot. Green Day has found success at the MTV Video Music Awards, receiving nine nominations for "Basket Case", the second single from Dookie; and six awards for "Boulevard of Broken Dreams", the second single from American Idiot. The band has also received 18 nominations from the Grammy Awards, including six for American Idiot in 2005. At the American Music Awards, the trio has received five nominations for the "Favorite Alternate Artist" award, finally winning it in 2005. The band was nominated for 9 Billboard Music Awards in 2005, winning 6 of them on the night of the show, including "Rock Artist of the Year" and "Rock Song of the Year." They won a Grammy for "Rock Album of the Year"- 2010.

Tré Cool won "Best Punk Drummer" in DRUM! Magazine's 2011 Drummies, which recognizes some of the best drummers across music genres. He was also featured in the Nitpick Six: The Six Best Drum Fills and ranked in at number 6 for the intro to "Basket Case".   In 2014, LA Weekly named Tré Cool #2 of the "Top 5 Punk Drummers of All Time."

On April 18, 2015, Cool and his Green Day bandmates were inducted into the Rock and Roll Hall of Fame in their first year of eligibility.

During early 2020, Cool sat in with Willie Nelson and his band after the death of Nelson’s friend and drummer Paul English.