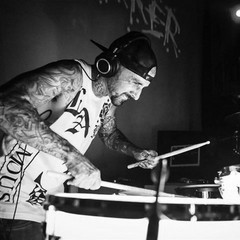 Travis Barker is quickly becoming one of the most influential musicians on the Rock scene today. Travis began studying drums and taking lessons at the age of four. He studied with a jazz teacher and was exposed to many different styles of music. While in High School, Travis played in the jazz ensemble and marching band. He subsequently gained much experience performing at regional competitions and festivals. His senior year, Travis passed up drum corps tryouts for touring with a rock band. He gained more experience as a rock drummer in a few early bands such as Feeble, The Suicide Machines, and The Aquabats. In 1998, Travis replaced Blink 182's first drummer and came to the band's rescue at one show by learning over twenty songs in just a few hours and performing with them later that evening. Travis quickly became a much respected and popular member of the band and solidified his position as the timekeeper with his professional attitude, rhythmic skills and talent. Blink-182 won a Teen Choice Award, a Blockbuster Music Award, and appeared on the MTV Awards 2000 where they performed "All The Small Things" and won Best Group Video. In Europe, they received an MTV Europe Award for Best New Act. They have performed on Saturday Night Live and the Tonight Show (twice), appeared in the hit movie American Pie and opened the Billboard Music Awards. The band has also graced the covers of Rolling Stone, Alternative Press (twice) and Teen People. At this point, Blink-182 is a worldwide phenomenon, with their recordings reaping multi-platinum status and their concert tours selling out everywhere. The band's popularity has only increased since their formation in '93. In 1994 they released their first full-length album, Cheshire Cat, on Grilled Cheese (a division of Cargo Music). In 1996, they signed a joint-venture record deal with Cargo Music and MCA Records, with their first MCA release Dude Ranch (1997) setting the stage for their current success. By the end of 1998, they had emerged as one of the most popular pop-punk bands of the year. Worldwide sales of Enema of the State are now over seven million copies, not to mention the fact that the album has been on Billboard's Top 200 for over a year. The album's three singles, "What's My Age Again," "All The Small Things" and "Adam's Song" have dominated MTV, alternative, rock and Top-40 radio.