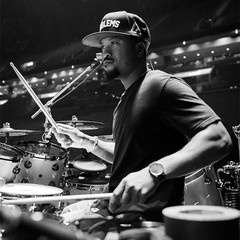 Tony Royster Jr. has been playing drums since the age of 3. Often referred to as a "prodigy" by his fans, he has participated in numerous drummer events and contests worldwide including the 1995 Guitar Center National Drum-Off competition in Hollywood, CA which he won at the ripe old age of 11! Tony is becoming accustomed to high-profile performances that include TV's Nickelodeon House Band (lead by Paul Shaffer of the David Letterman show), the Jenny Jones show, the 42nd Annual Grammy Awards show, and an international tour in 2001 as the drummer for #1 selling Asian artist, Hikaru Utada. Additionally, he is regularly invited to perform at prestigious events worldwide such as PASIC (Percussive Arts Society International Convention), Modern Drummer Festival, the Montreal Drumfest, and the Florida Drum Expo. Recently, Tony has been toruing the world performing with Rap legend / mogul Jay-Z. Proficient in numerous styles, Tony excels at Funk, R&B, Latin, Rock, and Jazz. He has performed alongside such notable drummers as Dennis Chambers, Billy Cobham, Steve Smith, Sheila E., and veteran drummer Chester Thompson. He has also graced the stage with legendary musician's Branford Marsalis, Paul Shaffer, Jimmy Jam and Terry Lewis, among others. Tony Royster Jr. was voted #1 Up and Coming Drummer by Modern Drummer magazine 2000 readers' poll and has been voted #2 in the UK 2001 readers' poll. He has appeared on the cover of the millennium issue of Modern Drummer magazine with Dennis Chambers and continues to receive high marks that earn him endorsements with companies such as DW Drums, Zildjian Cymbals, Vic Firth sticks, Evans drumheads, LP percussion, Drumframe, Shure microphones, Warner Bros. Publications, HQ percussion products, Drumometer, and Specialty Cases. Tony's talents have carried him across the globe to Europe, Japan, and Asia but in 2001 he achieved substantial international acclaim with the Warner Brothers video release of, "Common Ground", featuring Tony with his mentor, and favorite drummer, Dennis Chambers. Most importantly, Tony is a positive role model for all kids. His motto is "Be cool, stay in school" and he sets the standard for personal achievement among his peers.