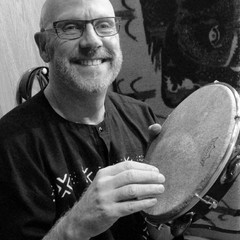 Tom Teasley, described in the Washington Post as “a multi-instrumental genius,” maintains a unique career as a solo percussionist, composer and collaborator.

Tom was awarded the Drum! magazine "Drummie"Award" for 2016 "World Percussionist of the Year" and first runner up for "Percussion Clinician". Tom is a 2010 and 2011 (nominations in 2012, 2014, 2015) Helen Hayes Theater Award recipient for outstanding sound design. Tom tours frequently throughout the world performing and presenting clinics for the instrument companies he endorses including Yamaha, Vic Firth, Sabian, Remo, Latin Percussion and others.

He is the 2012, 2013, 2014 WAMA (Washington Area Music Award) World Music Instrumentalist of the year. A five-time recipient of a Fulbright-Hayes grant for performances in the Middle East, Tom collaborated with indigenous musicians and gave historic performances in Saudi Arabia, the West Bank and Jerusalem. He has been an artist-in-residence at the John F. Kennedy Center for the Performing Arts and has collaborated with the National Symphony as both a soloist and composer.

As an international collaborator he has performed by invitation in Europe, South America, New Zealand and Samoa. Tom earned the Artist-of-the-year award from Young Audiences of Virginia for his creative and educational presentations. His seven CDs have been greeted with international airplay and acclaim. Tom's innovative percussion techniques are documented in the 2016 book / DVD release, An American Approach to World Percussion by Alfred Music. He has been the subject of feature articles in both “Modern Drummer” and “Drum!” magazines. Please visitwww.tomteasley.com for more information