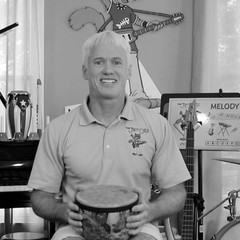 Dorian J. (DJ) Johnston is the founder and creator of The Jam Cats Music. He started playing drums and guitar in high school and then pursued his studies in music theory and piano at Morris County College. He also studied at The Collective School of Music in New York City, where his primary focus was on drum set as a part of the Drummer’s Collective. Here he had the opportunity to learn and jam with many industry heavyweights and to experience the amazing music scene in the tri-state area from a new perspective. Having come from a mostly rock background, the exposure and concentration on Latin and jazz music served to deepen his knowledge and passion for drumming.

DJ’s playing experience includes 14 years of street percussion performance with the international touring group The Rhythmics. Based in New York City, this group is comprised of top Broadway and Off-Broadway performers who are absolutely the best in the fields of urban drumming, dance, and modern tap. The RHYTHMICS is unmistakably unique as they turn everyday objects into percussive instruments making music with traffic cones, buckets, keyboards, trashcans, hard hats, briefcases, and corporate products like pill bottles, keyboards & even mobile phones. Their shows have traveled the globe having performed in London, Paris, Warsaw, Berlin, Seoul, Beirut, Lebanon, Geneva, Tokyo, Osaka, Nagoya, Brazil, Monte Carlo, Hawaii, Scotland, Barcelona, Cannes, Australia, as well as throughout the United States. Their work has become the standard for excellence in creating original shows for corporate theatre.

Along with The Rhythmics, DJ also played in many original bands, wedding bands and the northeast club band scene.

In 2007 DJ created an early childhood education program called The Jam Cats Music. The primary goal of the program is to introduce music to young children through weekly classes that are centered around a curriculum that includes sing-alongs, movement and dance, music fundamentals and instrument discovery. Although, having fun is objective number one for children of this age, these classes also deepen children's knowledge of diversity and multiculturalism through exploring music and movement of other cultural groups. Furthermore, the introduction of basic music theory elements such as notes, melody, pitch and dynamics prepare them for elementary education music classes and private lessons. The mission of The Jam Cats Music is to see a smile on the face of every child as they discover the magic of music.