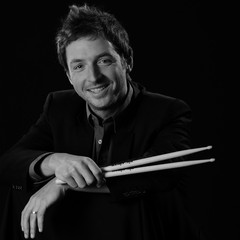 Ted Atkatz auditioned and won a position as Section Percussion with the Chicago Symphony in 1997. He became the orchestra’s Assistant Timpanist in 1999, and in 2001, he auditioned for the CSO’s Principal Percussion position. He won. During that time he formed a band, called NYCO, which featured him as the lead singer and songwriter. In 2006, Ted left the CSO to devote his energies to NYCO, however, he continued to teach privately and perform with orchestras around the world. To date, Ted has performed with the Atlanta Symphony, Berlin Philharmonic, Boston Symphony, Boston Pops, Chicago Chamber Musicians, Grand Teton Music Festival Orchestra, Hong Kong Philharmonic, Los Angeles Philharmonic, Pacific Symphony, and the Santa Barbara Symphony.

NYCO has released three albums: Two (2005), Realize (2008), and Future Imperfect (2012). The band was the subject of a 2008 New York Times article and its music has been featured on MTV and in advertising for Volkswagen and JC Penney. NYCO was invited to perform at the South by Southwest Music Festival in 2012.

Ted got the concerto bug in 2013; he performed Christopher Rouse’s percussion concerto, Der Gerettete Alberich, with the Santa Barbara Symphony, and Mark Anthony Turnage’s duo percussion concerto, Fractured Lines, with Matthew Strauss and the Texas Music Festival Orchestra. He has since performed the Rouse concerto with the Lynn Conservatory Philharmonia and the Bob Cole Conservatory Orchestra.

Ted now resides in Los Angeles, where he performs, composes and teaches. Ted has played on several movie scores, including “Frozen”, “The Lone Ranger”, “White House Down”, and “Up”. Ted became a published composer in 2013 with the release of Tributes for Snare Drum (Rowloff Publications). In 2014, Ted was hired as the Director of Percussion Studies at the Bob Cole Conservatory of Music at California State University at Long Beach. He is on faculty at Lynn Conservatory of Music in Boca Raton, Florida, and he joins the faculty at the Colburn School this year.

Ted is a faculty member at Music Academy of the West and the Texas Music Festival. He has participated in the St. Barts Music Festival since 2001. Prior to winning his Chicago Symphony position in 1997, he was a member of the New World Symphony. He is a three time PASIC clinician. His joint clinic with Will Hudgins at PASIC in 2012 featured a performance of his percussion duo, Turn Key Hotel.