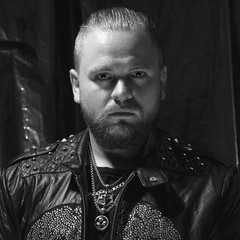 Cologne Germany's Sven Dirkschneider is the youngest member of U.D.O. and son of mastermind Udo Dirkschneider.

From the beginning on Sven is in touch with his father´s job and runs around backstage at his shows. His father´s world consisting of tour busses, lots of event techniques and travelling has been normal to him since he can think. And he feels at a very early stage that this could be his world as well. Since he is 5 years old Sven has been playing drums already.

After his school graduation he starts studying for media designer and event technician. Whenever he can and is on vacation he travels with his father and starts helping out as a drum tech at U.D.O. shows. As soon as he finishes his study Sven becomes a full time drum tech for U.D.O.. With DAMAGED he also has his own band that he plays drums with since he is 16. In 2012 he even supports U.D.O. with them. Also for British legends SAXON Sven starts working as a drum tech and replaces Nigel Glockler beginning of 2015 as a show drummer as Nigel has to recover from a surgery. Now Sven is a fix member in U.D.O.