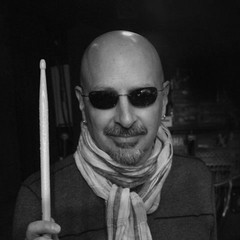 Steve Smith was originally drawn to the drums by hearing marching bands in parades as a child in his native Massachusetts. At age nine, in 1963, Smith began studying the instrument in earnest with local Boston area teacher Bill Flanagan, who played in big bands in the swing era.

Smith performed in the usual school band program and garage bands while in his teens, but also began to broaden his performing experience by playing in a professional Brockton concert band and even the big band at the local college, Bridgewater State. After high school, Smith began studying music at the famed Berklee College of Music in Boston in 1972. There he received valuable instruction from such renowned teachers as Gary Chaffee and Alan Dawson.

In 1974 Smith's professional career began in full, at 19 years old, with his tenure in the Lin Biviano Big Band, which he toured and recorded with for the next two years. At that same time he also performed with bebopper Buddy DeFranco and was a member of free-jazz group The Fringe featuring George Garzone. In 1976, Smith began his association with jazz/fusion by joining violinist Jean Luc Ponty and recording the album "Enigmatic Ocean" (Atlantic 1977), which also featured guitarist Allan Holdsworth. However, it was while touring with rocker Ronnie Montrose a year later that Smith was asked to join the popular rock band Journey which brought his playing to the attention of a young rock audience.

With Journey, Smith toured around the world and recorded many successful albums including the immensely popular "Escape" (Columbia 1981) and "Frontiers" (Columbia 1983), both of which garnered the band many Top 40 hits. Smith's inventive timekeeping, stadium sized tom-tom fills and deep sense of the groove enabled him to produce some of the most critically acclaimed rock drumming while at the same time propelling the band to much popular success. The Journey catalogue has sold over 50 million records.
In 1985 Smith left Journey to pursue his original passion, jazz, and to continue his developing career as a session player. Over the past 20+ years, Smith has played on many hits with such diverse artists as Mariah Carey, Bryan Adams, Zucchero, Andrea Bocelli, Ray Price and Savage Garden.

Smith began leading his own fusion band Steve Smith and Vital Information in 1983 while still a member of Journey. Vital Information currently features Tom Coster on keys, Baron Browne on bass and Vinny Valentino on guitar. Vital Information's 2007 Hudson Music release, "Vitalization," is a best seller and has gathered critical acclaim around the world.
Steve is also the bandleader of Steve Smith's Jazz Legacy, a group carrying on the tradition of many of the great drummer-led jazz bands: communicating with music lovers of all generations, striving for excellence and playing non-compromising, burning, straight-ahead jazz. Jazz Legacy features Andy Fusco on alto sax, Walt Weiskopf on tenor and soprano saxes, Mark Soskin on piano and Baron Browne on bass.

Smith has also maintained an extensive touring and recording career, appearing with many jazz luminaries such as Mike Mainieri's group Steps Ahead. This band, which included virtuosos such as Michael Brecker, Richard Bona and Mike Stern, was one of the most successful of the '80s electric jazz groups and Smith contributed greatly to their tight, energetic sound for over ten years (1986-1993 and again from 2005 to the present).

Other high profile jazz touring and/or recording gigs that have filled the drummer's schedule include such artists as Ahmad Jamal, Bill Evans, Randy Brecker, Zakir Hussain, George Brooks' Summit and the Buddy Rich Big Band, with whom he has performed in many tribute concerts to the late drumming idol. He also rejoined Journey in 1996 to record the reunion album "Trial By Fire" (Columbia 1996). Smith's calendar often includes many drum clinics in which he is able to display his phenomenal techniques and concepts to drumming students around the world.

Smith's drumming, while always decidedly modern, can best be described as a style that embodies the history of U.S. music. His original love of rudimental parade drumming is evident in his intricate solos. Likewise, his command of jazz, from New Orleans music, swing, bebop, avant-garde to fusion, is applied with his powerful rock drumming sensibilities and allows him to push the boundaries of all styles to new heights. His musical focus is committed to the exploration of improvised music incorporating styles as diverse as Blues, Jazz, R&B, Funk, Cajun and the rhythms from the music of India.

In 1998, Smith began producing and playing on a series of driving electric jazz albums for the Tone Center label with a revolving cast of talented players such as Dave Liebman, Anthony Jackson, Frank Gambale, Stu Hamm, Tom Coster, Larry Coryell, Jerry Goodman, Howard Levy, Steve Marcus, Scott Henderson and Victor Wooten.
Smith's explosive solos and intricate timekeeping served to gain him much acclaim from sources such as Modern Drummer Magazine, whose readers voted him the #1 All-Around Drummer five years in a row. In 2001 Modern Drummer Magazine named Steve as one of the Top 25 Drummer of All Time, in 2002 he as voted into the Modern Drummer Hall of Fame and finally in 2003 his Hudson Music DVD "Steve Smith Drumset Technique - History of the U.S. Beat" was voted #1 Educational DVD of 2003. Steve latest Hudson DVDs are "The Art of Playing With Brushes" and "Steve Smith Drum Legacy."

As a drummer, Steve Smith has worked for, and with, the best. With this work he is consistently pushing the boundaries of creative drumming and constantly expanding upon his strong and musical voice at the top of the international drumming community. As an educator, Smith is both the eternal student, and the perpetual teacher of the drums. As a bandleader, he is one of the very few drummers whose endless touring schedule brings world-class bands to all corners of the globe through an endless regimen of live performances.