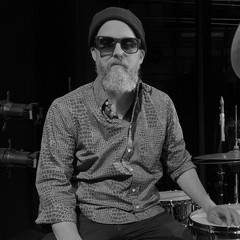 Stephen Bidwell was born in Washington, DC and grew up in the Virginia suburbs.  Since being first handed drumsticks in the late 80s he has studied and lived in West Virginia, Pittsburgh, New Orleans, and New York but has called Austin, Texas home since 2005. Somewhere in those travels he earned a Bachelor's degree in classical percussion (two of them actually) and a Master's degree in Jazz studies. Since early 2018 he has been the drummer for the Grammy nominated Black Pumas, a psychedelic soul group known for incendiary live shows. When not on tour with Black Pumas, Stephen plays in several diverse projects (Hard Proof, The Calm Blue Sea, Azmaris, Mood Illusion), works in any genre you can think of as a sideman, and records and teaches lessons at his home studio.

"I truly believe in the quality and consistency of Remo heads. I know that they are a part of every great recording that I aspire to emulate.  When I'm on tour in another country or in the US, I know that I'm going to arrive at the show and find Remo heads on the kit.  My first purchase for school band was a Remo practice pad. My first kit was a Remo PTS kit. My high school graduation present was a 16" Remo Djembe. I have truly come to rely on the Vintage Ambassadors in the last decade on snares and toms."  -Stephen Bidwell