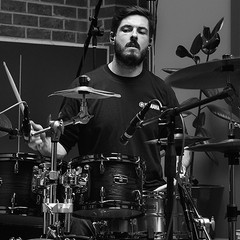 New Zealand born Stan Bicknell is a self-taught drummer now residing in Melbourne, Australia. His time here has seen him touring and recording with artists such as: Kimbra, Miami Horror, Ecca Vandal and his own band The New Caledonia, to name a few.

During his time with Kimbra, Stan played on her acclaimed debut album ‘Vows’. His Motown grooves can be heard on the track ‘Cameo Lover’ which won both an ARIA and APRA award in 2011 as well as playing on her now iconic ‘Sing Sing’ sessions on YouTube, clocking up millions of views.

Amongst his own personal projects and commitments outside of drumming, Stan likes to teach and influence as well as filming drum videos for his online subscribers. He also set up and runs Australia’s first and largest drum shedding community ‘Drummers Summit Melbourne’, inviting in some of country's top players in for their now infamous ‘DSM shed sessions’.