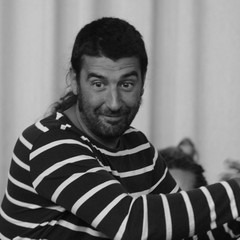 Passionate about drumming since an early age, Seve studied West African rhythms with African drummers in Barcelona, Afro-Cuban in the ISA Art Institute in Havana (Cuba), has taken 1-on-1 lessons with Yaroldy Abreu, and has a master in Music Therapy (ESMUC Barcelona). In addition, he maintains a long-lasting relationship with Gnaua masters from the desert in Morocco, who he has collaborated with in his numerous trips. He has also been playing various multicultural rhythms for many years now.

In his vast experience as a Music Therapist, he has worked with Autism Spectrum Disorder (ASD), mental and physical disability, dementia, social exclusion, and rare disorders. Drums are the tool par excellence in his music-therapy sessions.

In addition Seve has facilitated drum workshops since 2002, attended drumming sessions for many years with Lluis Molas (the Catalan Guru of Drum Facilitation), and participated in Transpersonal Dance workshops delivered by Guem.

In 2015 he met Arthur Hull in his VMC training, which gave him insights into Drum-circle facilitation. In 2016 and 2017 he again attended trainings. Over the following years he has been attending several seminars and trainings: Drum-circle facilitation with Pau Gimeno, Dementia and Mental Health with Dr Jane Bentley, Stories in Drum-circles with Paul John Dear, Mentoring with Christine Stevens, The Business of Drumming in Business with Mary Tolena, Rhythm2Recovery with Ray Watters, and Rhythmic Connections with Mary Knish. He facilitates drum-circles of all sorts: disabilities, families, schools, corporate, social exclusion, special events, etc. Currently, CEO of Som Percussió and promoter of Drumstrong Barcelona.