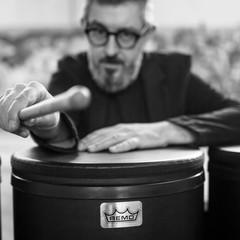 I became a professional musician since 1998.  Since then, I have worked with different groups and artists, both in studios and live performances, as well as on TV programmes and musical theatre shows.

In the field of publishing, I was Chief Editor of the magazine Batería Total (the Spanish version of Modern Drummer Magazine) from 2002 to 2003 and from 2009 to 2012.

In terms of education, I have taught drumming, instrumental ensembles, and certain theoretical subjects in various schools (both public and private) and also on an individual level.

I was a contributor to the Virtual Drummer School, carrying out corrections and editing of musical scores.

On 2011, I started a new path in my professional field, researching, learning, working, creating, and becoming more acquainted with Drum Circles and Music Facilitated Events.

In 2013 I travelled to the USA to learn first hand everything related to this discipline.

These were my jobs, classes and studies during my American adventure:

• Beat the Odds (Los Angeles, 2013) – Training for facilitators of groups of persons at risk of exclusion, run by UCLArts and Healthing, with Mike De Menno, Ping Ho and Giselle Friedman.

These last years, I have been facilitating corporate drum circles (up to 300 people) and participating in different music events and festivals, such as the iFest, the PING Helsinki, or the Shcibsted Christmas Night (performance with more than 30 people on stage -5 musicians, 14 performers and 12 CEO’s, as hidden performers- and 1000 people in the audience playing shakers and body percussion). I have also been facilitating drum circles for schools with children around Catalonia, and providing training sessions for music teachers.

Since 2013, I am a collaborator of the Orquestra Integrada, an orchestra with disabled and non-disabled people, with whom we have been performing one big gig every year.

On July 2017, I presented the show ‘EPP!’, a participative percussion show, sponsored by Fundació La Caixa, with 150 people playing percussion. As director of the performance, I wrote the full score and conducted all the process of creation, from rehearsals to the show, including the trainings with participants.

During Autumn 2017, I was invited to conduct a percussion master class at OT 2017 (a music TV contest), and recorded some commercials, such as those for D.O. Penedès, a Catalan wine company.