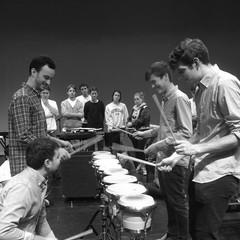 Lauded by The Washington Post as “revitalizing the world of contemporary music” with “jawdropping virtuosity,” Sandbox Percussion has established themselves as a leading proponent in this generation of contemporary percussion chamber music. Brought together by their love of chamber music and the simple joy of playing together, Sandbox Percussion captivates audiences with performances that are both visually and aurally stunning. Through compelling collaborations with composers and performers, Jonathan Allen, Victor Caccese, Ian Rosenbaum and Terry Sweeney seek to engage a wider audience for classical music.

Sandbox made their New York debut in 2012 on the Concerts on the Slope series in Brooklyn. Following that performance, they accepted an invitation to become artists-in-residence of the series and have returned in each subsequent season. Later that year, Sandbox worked closely with composer James Wood on his masterpiece Village Burial with Fire at the Norfolk Chamber Music Festival. While at Norfolk, Sandbox played alongside the great Hungarian percussion quartet Amadinda – Aurél Holló, a member of Amadinda, later said about Sandbox: “With an array of skills, talent and freshness, these young artists seem to be pushing their limits up in the skies, as I realized listening to them at the Yale New Music Workshop. Sandbox Percussion is the promising group of the near future, battering right on your door.”

Last season, Sandbox gave a staggering twelve world premieres by composers such as Robert Sirota, Amy Beth Kirsten, David Crowell, Thomas Kotcheff, Alex Weiser, and Tonia Ko. Six of these premieres were by composition students at the Yale School of Music and were featured on the New Music New Haven concert series. This past Spring Sandbox, along with flutist Tim Munro, performed the world premiere of Amy Beth Kirsten’s, They Might be Giants as members of a larger mixed ensemble, HOWL co-directed by Amy Beth Kirsten and Mark DeChiazza.

In addition to keeping a busy concert schedule Sandbox has also participated in various masterclasses and coachings at schools such as the Peabody Conservatory, Curtis Institute, Cornell University, and Furman University. While there they coached students on some of the most pivotal works in the percussion repertoire including Steve Reich’s Drumming, György Ligeti’s, Síppal, dobbal, nádihegedüvel and John Cage’s Third Construction.

Most recently has marked the quartet’s growing interest in composition. Last season Jonathan Allen’s Interlude and Victor Caccese’s Chatter were featured on eleven separate programs throughout the U.S. Sandbox also worked closely with composer David Crowell on a marimba arrangement of his saxophone sextet, Point Reyes. They gave the world premiere in November 2014 in Brooklyn, NY.

Sandbox Percussion has now reached their fifth concert season and will celebrate with a fourth return to the Concerts on Slope series in Brooklyn and a special performance of John Luther Adams’ Strange and Sacred Noise at Trinity Church on Wall Street. They will also make a return visit to the Peabody Conservatory and Furman University where they will coach and perform Steve Reich’s monumental work, Drumming. Other highlights include a third piece written expressly for them by composer and longtime friend, Thomas Kotcheff, three separate programs at Brooklyn’s mega club Verboten, as well as the first ever percussion quartet concert at the Phillips Collection in Washington D.C. Sandbox Percussion endorses Vic Firth drumsticks and Remo drumheads.