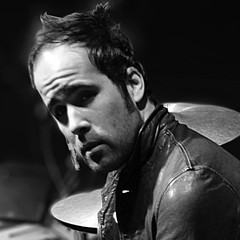 1979-1984 as a small child, I banged on the washer and dryer, sometimes the fridge, even my aunts old piano, singing and humming in the garage.

1985 first time playing with a band, at Ceasars Palace where my mom worked. Officially the youngest kid to play a song in a casino... The song was "play that funky music white boy". The same year I entered in the 4th grade talent show where everyone was a winner. I made friends with all the black kids instantly. The girl I crushed on made french toast.

1986 moved to northern California and began playing with a 29 year old bassist named Kevin who was a firefighter. His dad was a white guy and his mother was African American so he was able to show me some soul whilst still relating to a white kid from Vegas. Began to get into lots of music that was 'my own' and not influenced by my parents who were constantly blasting everything from Beatles to Steely Dan.

1987-89 moved back to Vegas as a "skateboarder". In California I entered small time skate competitions. Took more drum lessons on and off.

1990 junior high punk rock/brit pop phase. Sported white combat boots that more or less resembled roller skates for girls; good look though. Junior high varsity jazz band for a month then dropped out sighting artistic differences with band director. Watched Depeche Mode 101 and Cure videos everyday, even before school in the morning. Got some casio tones and my dad taught me the guitar. Began writing songs that were basically retarded versions of Cure songs. Looking back, some were ok.

1991-94 high school and also the start of my first band, Purple Dirt. Branched out, began playing with the older kids thus making me more cool amongst my peers. Met more kids my age and played in various bands in Vegas making friends for life; one of which is now my dentist. Began private lessons again with the possibility of majoring in music in college. Instead chose biology, did poorly.

1995-99 college (various majors) and various bands from weddings to desert parties powered by generators. Did some small and big band jazz stuff with the community college for a few years. Finally decided to major in music at UNLV.

Met my band, The Killers in May, 2002. Got in a garage and played almost every day. Played our first show June 30th in Las Vegas. From then till now it's been full steam ahead. Still in that garage.