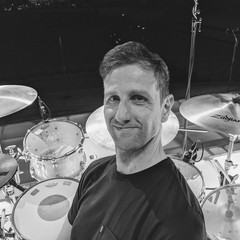 Richard Hughes is an English musician, best known as the drummer of the British pop rock band Keane.

Richard David Hughes attended Tonbridge School where he was friends with future Keane members Tim Rice-Oxley and Dominic Scott. At the age of 17, Hughes learned to play the drums, and when Scott and Rice-Oxley formed a small covers band in 1995 he was invited to join as drummer. They later invited future lead singer Tom Chaplin to join the band, although Hughes initially objected, later stating, "The idea of giving someone who's already the loudest person you know a microphone was not something that I was particularly keane on."

Hughes then went to university at University College London where he received a degree in Geography. He took a job as a secretary at the BBC in order to support himself and the band while they lived and practiced in a flat on Upper Clapton Road in London. He also had a job as a supply teacher for a short time. It has been said that the song 'Put it Behind You' was written by Rice-Oxley for Hughes after he had broken up with a girlfriend, and that much of the album 'Perfect Symmetry' - in particular the track 'You Don't See Me' - was also written about him and his unrequited love for a music journalist who broke his heart by marrying another man. Hughes is known to be the most humorous member of the band. Since Under the Iron Sea was released he has provided additional backing vocals for the band.

Hughes collects "Nikon" brand cameras and calls himself "Nikon Guy". He is a great lover of photography and updates the site Keane with "photoblogs" with photographs of the band on tour. He is a fan of the Irish rock band U2, and other bands and groups like The Smiths, The Beatles and Björk. His favorite song from the album Hopes and Fears is "Bend and Break" and "Put It Behind You" from Under the Iron Sea. Hughes is colourblind to green and brown, as said in a video where Richard answers 50 fan questions (can be found on the band's YouTube channel.)