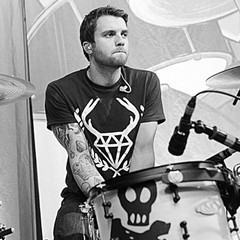 ALL TIME LOW - BIO Since forming in the Baltimore suburbs in 2003, All Time Low have become one of the biggest pop-punk bands to emerge on the scene, building a grassroots following of die-hard fans with very little radio airplay and a touring ethic that would rival road-weary vets like Green Day. Their profile is only going to rise with the release of their stellar Interscope debut Dirty Work – a 12 track mix of hard-charging anthems and sugar-shot rockers that are poised to dominate house parties and joyrides this summer. As singer-guitarist Alex Gaskarth promises, "I feel like dancing tonight – I'm gonna party like it's my civil right!" The album is one of rock's most anticipated of the year, with Alternative Praise hailing All Time Low on the cover of their "Most Anticipated Music of 2011" issue. "In a lot of ways, this is the perfect summer record," says drummer Rian Dawson of the band's fourth album. "The songs are really loud and will get you to roll the windows down. It's just a fun record all around." For Dirty Work, All Time Low – featuring Gaskarth, Dawson, lead guitarist Jack Barakat, bassist Zack Merrick – teamed up with some of rock's most in-demand producers and studio aces, including Mike Green (Paramore, Boys Like Girls) and Butch Walker (Pink, Dashboard Confessional). The result is their most confident collection of songs yet, including the blistering "Time-Bomb" and "Guts," which features a guest spot from Maja Ivarsson of the Swedish indie-rock group the Sounds. All Time Low also roped in the master of the pop-rock anthem – Weezer's Rivers Cuomo – to co-write "I Feel Like Dancing," which Gaskarth penned with Cuomo at his Southern California home. "I just threw it out there that we wanted to work with him as a shot in the dark," says the 23-year-old. "But he was really into the idea and it was such a rad experience. I went to his house, chilled on the floor, and we talked about our favorite bands. I think we knocked that song out in an hour." Despite the good-times vibe of Dirty Work, All Time Low spent a grueling two years making the album – in between brief breaks from their non-stop touring schedule (which has included top slots at Warped Tour in 2007, Bamboozle in 2010, and festival billings with their heroes Blink-182). The majority of the sessions were completed with Green in Los Angeles, but the freewheeling schedule only boosted the band's songwriting spirits. "We hate to stop touring," says Gaskarth. "Rather than locking ourselves in the studio, we're always hopping around and changing environments. It helps refresh everybody and breathes new life into our songs." All Time Low's influences are far more diverse than their peers and you can hear their love of classic punk and rock all over Dirty Work. "Just the Way I'm Not" is the band's homage to Def Leppard classic stadium rockers – they even sampled the British group's drum sound on the track – while cuts like "Do You Want Me (Dead)" find Gaskarth channeling icons like the Clash at their catchiest. "They played a vital role in a few songs on the album," he says. "I really admired how they broke all the rules – they helped me realize that you can change up your sound and you don't have to be afraid of holding yourself back." Gaskarth's most surprising lyrical influence, however, came from Ella Fitzgerald's "It's Only a Paper Moon" on the track "Under A Paper Moon" – a testament to All Time Low's broad musical tastes and proof of how far Gaskarth has grown as a lyricist. "It's one of my favorite songs," he says. "We get lumped into this category of bands that grew up on Blink-182, but this song really puts us beyond that category of pop-punk." All Time Low have come a long way since forming in Baltimore, MD as teenagers playing Blink covers in high-school. Before they'd even graduated, they released two raucous mission statements -- the 2004 EP The Three Words to Remember in Dealing With the End and the 2005 full-length The Party Scene – and went on to sign with indie stalwart Hopeless Records in 2006. But it was their 2007 release So Wrong, It's Right that cracked everything wide open. All Time Low's third record, 2009's Nothing Personal, fared even better, debuting at Number Four on the Billboard chart and earning them positive reviews from outlets as far-reaching as Alternative Press and The Washington Post. Despite their success, All Time Low have kept their egos in check – even their road crew include pals who've toured with the band from their early days playing tiny Maryland clubs like the Recher Theater. "Sure, we could've hired Axl Rose's sound guy, but then you're just stuck on the road with this stranger," says Dawson. "When you surround yourself with friends, it's so much more fun and keeps you from turning into some kind of rock star douche bag." Still, All Time Low find time for plenty of backstage debauchery – such as a recent gig in New Jersey, where their tour bus erupted into a full-on party. "There were all these people I've never seen before," Dawson recalls with a laugh. "The stereo was cranked up really loud, it smelled like something was burning…but that's part of why being in a band is so much fun. When you're surrounded by your friends, it's like you're on a permanent vacation."