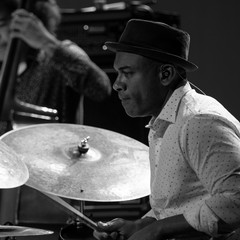 Reinaldo Santiago was born in Salvador, Bahia in Brazil in the year 1975. He started his musical career on the road, playing in pots and pans he found and eventually found his way through the local Samba de Roda and Capoeira groups. Through these beginnings, the passion of Reinaldo was born in percussion and music, and only in the later years for the battery. In 1992, Reinaldo became a professional drummer / percussionist and began performing with local emerging groups traveling through Bahia. During this period Reinaldo met and interacted with many musicians who shared his love of instrumental music. Inspired to create something from this will to play instrumental music, Reinaldo organized jam sessions on his terrace during the week, and when Saturday arrived, he played in the jam session of Solar Unhao, influenced by his friend Jurandir Santana, That's how he found it with highly respected instrumental musicians. Bahia and all of Brazil. During this time, Reinaldo always wanted to develop his personal ideas as a musician, so he began to meet frequently with his friends to play more complex songs, pushing to reach a higher standard. Over time, Reinaldo would become recognized as one of the best drummers in Salvador, one of the main session musicians, playing and recording with many artists from the Regional Baiana (popular music specific to Bahia) and MPB (Brazilian popular music). In 1997, Reinaldo changed his way of life leaving the music of Bahia to travel to the rural areas of Bahia. It was here that Reinaldo learned to play regional music, characterized by extreme simplicity. Reinaldo began to be part of the Dance Band dance groups. Normally, these groups traveled in the interior of Bahia and did not have access to the exhibition offered to the Regional Baiana and the MPB. In 1999, Reinaldo returned to Salvador and returned to attend the Jam do Solar do Unhão, collaborating simultaneously with several artists of national and international standard. At the same time, Reinaldo continued the tour in Brazil with many different artists; Toninho Horta, Steve Colleman, Nico Assumpçao, Jeff Decker In 2003, out of love, Reinaldo traveled to Italy and built a new life and a musical world, but still remembering his Brazilian roots. He began performing in Italy with many well-known names representing Brazilian music. With this new life, Reinaldo became a respected musician within the Latin Jazz scene in Italy and also began to develop interest in composing, with the intention of leading his own band and making his own compositions. It was in Rome that the seed was planted to record his first album as leader of the band and in 2012, almost 10 years later, Reinaldo returned to Brazil, taking with him his compositions and many ideas that he developed with his great friend, Mikael. Mutti (musician, composer, producer). Your album "Origin". celebrates the friendship with Mikael and honors the cultural heritage of Reinaldo participating in several national and international festivals, taking with him the deep sensitivity of his music with the freedom and the spirit of the Jazz, combining with an exciting and intoxicating sound that Reinaldo calls of "Brazilian Regional Jazz". 2016 Reinaldo Santiago recorded for the record company Alfa Music his second album titled (noname) musics composed by Reinaldo / Mikael and Greg Burk. This album by the Japanese and Italian critics is considered a new album for Brazilian music with several positive comments on the internet 2018/19 Reinaldo Santiago jazz part of the new project of the Great American Saxophonist Seamus Blake Brazilian 4et.

"  One of the things I am most proud of is being an endorser of the Remo brand, which I have always been an admirer of and since I started my career with drums, I use Remo and know that he was the precursor and innovator of drum skins, soon after he created various instruments and accessories for percussionists make me feel really at home, I love the Ambassador skins, they correspond exactly with the way I play and breathe the notes between the drums.  I love innovation when mixing and maintaining tradition, but I still prefer not to put anything on the skins to get a certain sound I think that Remo skins the drummer can play and have fun with any type of sound without covering it. "  -Reinaldo Santiago