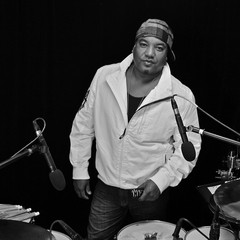 Grammy award-winner and 4-time Grammy-nominated drummer, RAUL PINEDA, has been named one of today’s best and most innovative Latin drummers in the world. Born and raised in Havana, Cuba, Raul’s unique style of playing -- a result of a coveted blend of Afro Cuban and contemporary influences applied to the modern drum set -- have catapulted him into being one of Cuba’s most influential drummers of his generation.

Raul’s combination of applied, modern techniques and the complex nature of Afro Cuban music became instrumental in shaping Raul’s unique sound. By 19 years old, Raul’s reputation for speed, accuracy, creativity, and technique attracted the attention of one of Cuba’s most popular bands, Sintesis. For the next 6 years, he recorded both the drum kit and batá drums in many of their critically-acclaimed albums.

At 25, Raul was featured in a world-renowned educational video entitled, The Drumset Artists of Cuba, which increased Raul’s popularity among drummers all over the world.

After watching Raul perform in Finland, Chucho Valdés, one of the world’s most legendary jazz pianists from Cuba, invited Raul to record on his Grammy-nominated album, Belé Belé in Havana in Toronto, Canada. Due the success of the album, Valdés, and Blue Note Records recruited Raul to join the Chucho Valdes Quartet from 1997-2000 that included a Latin Jazz All-Star Tour in Europe. The quartet’s 2nd album, Briyumba Palo Congo, was also nominated for a Grammy in 1999. The following year, Chucho Valdés Quartet -- Live at the Village Vanguard, in New York City, won the Grammy for Best Latin Jazz Performance. At the time of its release, Raul was residing and teaching at various music conservatories in Denmark before relocating to the U.S. in 2001.

Currently, Raul is on tour with Baaba Maal and working on his first instructional book on afro-cuban drumming.

"With Remo heads, I'm always able to project the sound I'm looking for that complements my style."  -Raul Pineda