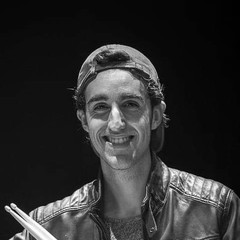 Pierre Lucbert started drums at the age of 4. The following year, he was admitted to the École Nationale Supérieure de Batterie Dante Agostini where he studies 8 years with Dominique Marseille. At the age of 14, he was admitted to the Conservatoire National de Région de Bordeaux. He does a double major. Student of Philippe Valentine, he obtains both Diplômes d’Études Musicales (DEM) with First Class Honours : the Musiques Actuelles DEM in 2016 and the Jazz DEM in 2017. From the age of 13, Pierre entered the professional world by occurring in numerous Drum Festivals, beside international drummers.

- In 2010, he opens the Drums Addict Festival in Bordeaux. He opens for Terri-Lyne Carrington, Eric Moore, André Ceccarelli…

- In 2011, he finishes on the podium of the national competition Tremplin Des Batteurs in Montpellier.

- In 2012, he’s France Finalist of the international competition Drummer Of Tomorrow.

- In 2012, he’s invited to play at the Summer Drums Show in La Grande Motte, beside Damien Schmitt, Fills Monkey…

In 2014, he’s called by the French saxophonist Francis Bourrec (Dee Dee Bridgewater, Peter Erskine…) to do some shows with him in Bordeaux. In 2015, an article is dedicated to him in Sud Ouest, one of the main regional daily newspapers in France.

At the end of the year, he was invited by Yamaha to play at the Yamaha Drums Show 2015 in Paris, beside Manu Katché, Loïc Pontieux, André Ceccarelli, Richard Spaven… At the beginning of 2016, he integrates the group of the French guitarist and composer Tom Ibarra, considered as one of the phenomena of the French musical landscape. With the Tom Ibarra Group and its jazz-funk compositions, he performed all year long in numerous major festivals in France : Jazz In Marciac, Saint-Emilion Jazz Festival, Andernos Jazz Festival, Jazz Entre Les Deux Tours, Jazz En Ville…and they open for Didier Lockwood and Thomas Enhco at the Jazz À Hirson festival.

At the end of 2016, Yamaha asks him to open for Larnell Lewis masterclass, drummer for Snarky Puppy, in Bordeaux. They realize an incredible duet improvised to close this day. In 2017, Pierre shares his experience with the audience during his first masterclass, in partnership with the school Rythm & Groove, in Libourne. He is rewarded with the Tom Ibarra Group because they win the First Prize of two French competitions : Briv’En Jazz Festival 2017 (Brive) and Jazz à Oloron Festival 2017 (Oloron-Sainte-Marie).

At the end of the year, Yamaha invites him for the 2nd consecutive time to play at the Yamaha Drums Show #2 in Paris, beside Dave Weckl, Derrick McKenzie, Larnell Lewis… In 2018, he records Sparkling, the 2nd album of Tom Ibarra. It includes two prestigious guests : the American bassist Michael League, leader of Snarky Puppy, and the French saxophonist Stéphane Guillaume.

An annual tour is organized, the Sparkling Tour 2018, in France and abroad (Georgia, Poland, Spain…). Then, Tom Ibarra wins the LetterOne Rising Stars Jazz Award, the biggest European jazz competition. The tour extends in Europe thanks to a programming in 7 major festivals : Norway, Ukraine, England, Germany, Italy, Spain and France. In particular, they support Marcus Miller at Jazz Open Festival in Stuttgart.

Then, he becomes a demonstrator for Yamaha by presenting to the audience electronic drums in music shows. At the end of the year, an article is dedicated to him in Batteur Magazine, one of the main national drum magazines in France.