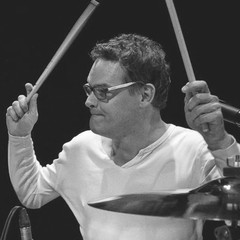 As a ten-year-old, he won the Dutch Championship in the 1st Percussion Division for his Drum Corps “Art & Friendship”. But after hearing Iron Maiden's first record, his love for rock was born. Until he attends a clinic by Dave Weckl at the age of 17, who opens his eyes to the subtlety and virtuosity of fusion. Then a long period of studying follows. During that time he plays in Topaz, with which he records the album “The Door” in 1995. Shortly afterwards, after a raid period, he is asked by the late Rosa King to play in her “Upside-Down” band.

After 4 years of touring through Europe and the Middle East, a phone call from Candy Dulfer follows. With her he will perform from Japan to the US and across Europe for the next 3 years. When Chris Gotte is killed in an accident in 2001 and Norman Bonink is allowed to take his place at Blof, Frank Boeijen approaches Oscar to replace Norman. The 3 years that follow bring Oscar through the Netherlands and Belgium along the major theaters, a new experience, because here he learns to adapt his playing to the acoustics of the hall. In 2003 a collaboration with Postmen follows, with whom he goes on tour throughout the year and records an album. In the same year, the Pop Department of the Amsterdam Conservatory was founded, where Oscar has since been active as a teacher and band coach as head of the Drum Department.

A great career so far, but something is still missing, the need for something of its own, a real bond. That collaboration comes when he joins SEVEN in 2004, a band with a few old comrades who all know the ropes. Their eponymous debut album released in August 2006 on PIAS.

At the end of 2007 Oscar is asked to come and play drums with Anouk in her new band. With a very young line-up they turned the Gelredome upside down in March 2008, which resulted in the very successful live album / DVD Anouk - Live @ Gelredome. Oscar will also perform a lot with Anouk in 2009, including at the 40th edition of PinkPop and in Amsterdam's Westerpark. His own drum school started in 2009.