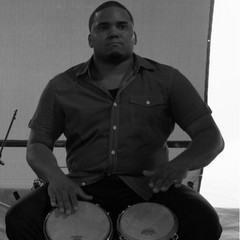 Orlando's dual artistic journey began at the tender age of four, when both his parents noticed that he possessed a multitude of talents unbecoming of a child so young. His father, a conga player and band leader in his own right, noticed that Orlando had a gift for expressing percussive rhythms and began to give him instruction on congas/bongos. His mother on the other hand, recognized that Orlando was very charismatic, attentive and theatrical as well, so she enrolled him in a child acting/modeling academy. What followed was an intense daily regimen of drumming lessons, acting classes and dedicated practice that would set him on a voyage far beyond his dreams.

On the acting and modeling side of his talent, he appeared in a Billy Joel music video, The Geraldo Rivera show, the television series, New York Undercover and the movie " Righteous Kill, " which starred Robert De Niro, Al Pacino and 50 cent. On his musical side, he busted out on the New Jersey Salsa music scene at the age of thirteen with his father's band, Will Vega & Friends and the band "Son Latino," which comprised of talented teenagers such as himself. Orlando's big break came when the bongo chair in the band of the legendary pianist, Eddie Palmieri, became vacant. On the recommendation of José Claussell, Eddie's drummer, he was invited to join the band; he was only eighteen years young. Since then, he has travelled the globe gaining recognition for the virtuosity he posses on his instruments and is one of a handful of young lions on the "salsa" scene with a keen sense and approach towards the classic and contemporary styles of Afro-centric drumming - distinction that has kept him busy performing with a variety of big name artist such as Tito Nieves, Herman Olivera , Jimmy Bosch, Frankie Negrón, Huey Dunbar, Jose Alberto "El Canario", Luis Fonsi and Daddy Yankee (60th Grammy award show "despacito"), and many more.

Currently Orlando still continues to freelance within the salsa scene with many artists and has also been working with Element Music since 2018.Element Music is a very well known company that does private events all over the world such as weddings and corporate events performing top 40 music, Funk, Pop, Rock, R&B etc. Orlando is also a member Stretch and Bobbito's band called The M19s Band. Stretch and Bobbito are legends of hip-hop radio. With a blend of offbeat humor and fresh music, the late-night program introduced the world to artists like Nas, Wu-Tang and Eminem and many more.