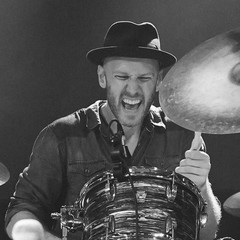 Mike McKee is the drummer/percussionist for the band Delta Rae, founder of Drum Team Collective: Rock and Roll Team Building, and co-founder of BaldMan Percussion. He has traveled the world with Delta Rae since 2009, and has performed on Conan O’ Brien, The Tonight Show with Jay Leno, and The Late Show with Seth Meyers.

Other achievements with Delta Rae:

Mike also is the founder and creative director of Drum Team Collective: Rock and Roll Team Building.  Since 2018, Drum Team Collective has been bringing out the inner rockstar in corporate teams by playing drums with a REAL rock band! The program improves communication, leadership, and team bonding all while experiencing the once-in-a-lifetime opportunity to be IN the band!

Finally, Mike is also the co-partner of BaldMan Percussion. Since launching in 2018, BaldMan Percussion has received 2 NAMM ‘Best In Show’ awards (The Junk Hat and The Stank Foot), have sold products to drummers in over 29 countries, and have an artist roster of superstars like Travis Barker, Matt Chamberlain, Tony Royster Jr, Chris “Daddy” Dave, and several others.