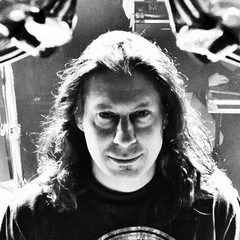 Mike Mangini has successfully applied his Rhythm Knowledge learning method to all styles of music, from classical & jazz to speed metal. He has consistently developed both the melodic and rhythmic sides of his musical personality. He has documented his command of these styles on recordings, with Internationally Renown and Multi Platinum Selling bands, as a multi-time Grammy nominee, as the featured clinician at most every drum festival in the world, and as a full-time faculty member at Berklee College of Music along with being named to their Educational Committee and as Advisor to the Percussion students. He is both teacher and student. He has been performing since the age of 4 and studying music since age 5. He studied percussion privately with Walter Tokarczyk (Public School System, Waltham, MA), from age 10 through 18. Since 1987 he has given private instruction to drummers, guitarists, and pianists. Michael completed his first drum clinic tour in 1996, and since then he has traveled the world as a clinician selling out venues in over 40 countries. The principles on which he based his extraordinary style can be found in his publications entitled Rhythm Knowledge Volumes I and II. His numerous awards include: Official Multi Category W.F.D. World’s Fastest Drummer, Boston's Best Drummer/Rhythm Section; NAJE All Eastern United States Percussionist - First Chair; All Massachusetts Jazz Band Drummer - First Chair; All Massachusetts Concert Band Percussionist - First Chair; All Massachusetts (N.E. District) Jazz Band Drummer - First Chair; Concert Band Percussionist (N.E. District) First Chair., and he appears in Drum Magazine Reader’s Polls yearly. He has spent time in the recording studios. His more celebrated Rock credits include his 6 records in 4 years with Steve Vai, Waiting for the Punchline by Extreme, Set the World on Fire, Metal & All for You by Annihilator, (Mullmuzzler 1, 2, and Elements of Persuasion) with Dream Theater’s James LaBrie, & Tourist by Pop Artist Chris Emerson . When Mike speaks of the importance of being able to relate to others "in and out of the limelight", he is talking from experience. He has performed in over 40 countries numerous times, led his High School bandmates to State, or National 1st place victories in Classical, Jazz, Percussin Ensemble and Marching Band, as well as, won Outstanding Musician Honors 7 times at mulit-school events, and is an active clinician with close multi year relationships to his endorsement companies and to the bulk of his drumming peers. He has also earned the respcect of his students on a personal and professional level with the highest student response rate percentage (in three consecutive years,) for all college professors in the national OCE online evaluations.