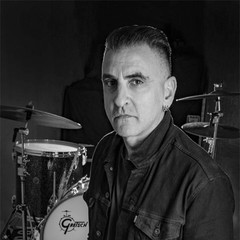 To any music fan, the magic and excitement of attending your first real rock concert feels like a Right of Passage. For drummer Mike Fasano, his first concert experience is one he'll never forget, because it directly helped to shape the course of his future. "When I was a kid," Mike remembers, "I went to see The Police on the Synchronicity tour and was totally blown away. The band kicked so much ass and I got turned on to the amazing drumming of Stewart Copeland. I'd recently started playing drums," he continues, "and I was at that age where it impacted me and made me realize, This is what I want to do with my life."

After four years on the cruise ship gig Mike's roommate, drummer Matt Sorum (who had replaced Steven Adler in Guns 'N' Roses) convinced him to stay on shore. "Matt gave me a lot of encouragement to stay in town and start auditioning so I could further my career, which just made sense," says Mike. "I decided it was time to take what I'd learned on the ships and apply it to a band situation." Working days at a music store selling drums, Mike played out in the evenings with several different bands and continued to build a solid groove playing rock, blues and even country western. Thanks to Matt Sorum, Mike got to play percussion on one song for Guns 'N' Roses' The Spaghetti Incident. There he met guitarist Gilby Clarke, who later invited him to play drums on his 1997 solo album The Hangover. Mike toured nationally with Clarke in support of The Hangover and was again called on to lend his drumming talents to its successor, Rubber. "Touring with Gilby and playing on his records was a very cool experience," says Mike. "He was the first artist to give me that kind of opportunity and I'll always appreciate him for that."

By now, Mike had forged important social connections within LA's music scene that were beginning to pay off. When Clarke heard that guitarist Ryan Roxie was looking for a drummer, Mike - who already knew Ryan socially - hooked up with Roxie and bassist Stefan Adika to form the Cheap Trick-influenced power-rock band, Dad's Porno Mag. Dad's Porno Mag released its self-titled debut in 1999 and created a buzz from New York to LA. "That band was crazy and I had a great time," says Mike. "The DPM record is still one of my favorite albums that I've played drums on." It was also through a mutual friend that Mike met Go-Go's drummer, Gina Schock. "Gina was looking for a drummer for her band K5, because she was singing. I called Gina and she was just captivating. Once we met, that was it. The next thing I knew I was rehearsing in her home studio; writing songs, recording demos and putting the band together." Though the K5 project was waylaid by a Go-Go's reunion, Mike considers his collaboration with Gina to be an invaluable experience. "It was great to have another drummer dig what you're doing," he says, "and she's a great drummer."

In January of 2000, Mike was asked to join the well-established rock band Warrant after playing drums for a year with singer Jani Lane in an all-star cover band, The Underdogs. Mike toured nationally with Warrant and recorded the albums Under the Influence and We Wish You a Hairy Christmas with the group before moving on in 2004. "Playing with Warrant gave me the opportunity to do a lot of really cool things," says Mike. "We played some huge venues, traveled all over and met so many great fans. I was also able to meet and tour with some of my rock heroes - guys I grew up listening to - which was unforgettable. That band was a laugh and we had a really good time. The best part though was that I'd always wanted to give back, first of all to the fans, because I was a fan. I also wanted to give back to the companies like Pork Pie Drums, DW, Vic Firth sticks, Zildjian Cymbals and Remo Drum Heads that had supported me over the years prior to having the exposure of playing with a national act like Warrant. I'm glad I was finally able to do that."

After leaving Warrant, Mike had the opportunity to really stretch as a player when he was asked to play drums on III: Ghost Tigers Rise, the latest album by LA's psychobilly/punk rock band Tiger Army. "I had known the guys in Tiger Army for years and they're good friends," says Mike. "Six months prior to recording their new album their drummer, Fred Hell survived being shot in the head, but he wasn't fully rehabilitated to the point where he could do long days in the studio. I got a call from their singer/guitarist Nick 13 asking if I could play drums on the record and I wanted to help them out. When I explained to Nick that I'd never played anything like their style of music, he expressed complete faith in my ability to pull it off."