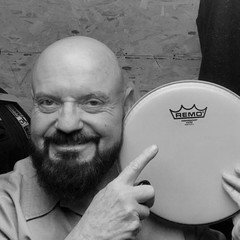 Few drummers will ever enjoy a career with such success and diversity as Mike Baird. The LA-based drummer was well on his way to fame when he kicked off his recording career in 1973. Armed with talent, technique, the ability to read music, and a dynamic style that centered on 'the groove', Mike quickly made a mark for himself as a first-call studio player, with credits on record, film, television and commercials. Everyone wanted him: Journey, the Moody Blues, Bob Dylan, Celine Dion, Al Green, Larry Carlton, Kenny Loggins, Hall & Oates, Michael Jackson, George Benson, Cher, Three Dog Night, Burt Bacharach, Randy Bachman, Stevie Wonder, Michael McDonald, David Foster, Joe Cocker, Rod Stewart, Tina Turner and Frank Sinatra. Mike's credits appear endless. But while he may be a great player, there's more to Mike's success than sheer musicality. A serious but fun-loving guy with a great personality, he not only makes the music feel good, he makes everyone in the studio or on tour feel relaxed, so they can get into the groove and make the music happen the way it should. That's why he's so hot with agents and musical directors, and why major international names like Italian star Vasco Rossi insist on having Mike in their band. And that's why, over thirty years after his first session, Mike Baird reigns as one of drumming's most successful players.