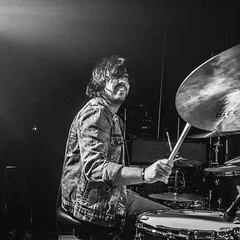 Hailing from Sydney, Australia and now residing in Los Angeles, Mike has quickly made a name for himself through his ability to perform in any musical situation. Whether it be in the studio or on stage, his experience as a Drummer, Producer, Musical Director and Multi-Instrumentalist have taken him to Europe, Asia, South America, North America and Australia. Artists he has worked with include: Scott Weiland, Emblem3, Zella Day, M-Phazes, The McClymonts, Troy Harley, Colby O' Donis, Rai Thistlethwayte/Sun Rai (Thirsty Merc), Reece Mastin (X-Factor Winner), Casey Donovan (Australian Idol) amongst many others. From an early age, Mike began studying classical percussion and ranked in several national classical competitions. As a teenager, his love for the drum set took over and as his education continued, he was granted a scholarship to the Australian Institute of Music where he majored in contemporary performance and Jazz. In 2009, Mike signed with the band Porcelain (Universal/Motown) and in 2010 he won the Australian Billy Hyde Drummers Playoff. Shortly after this, he decided to re-locate to the USA and focus on being a Studio and Touring Musician. Since living in America, he has been on multiple national and international tours with Emblem3 with Selena Gomez as well as Scott Weiland (formerly of Stone Temple Pilots and Velvet Revolver). He has also appeared on such shows as: Good Morning America, The View and The Arsenio Hall Show. Mike has composed, recorded and produced songs for feature films Yesterday was a Lie and Center Stage 2 - Turn It Up, the short film R.U.R.: Genesis, as well music for Fox Sports and several U.S. campaigns for Outback Steakhouse. He has also produced/mixed/recorded several EPs and singles over the course of 2014/15.