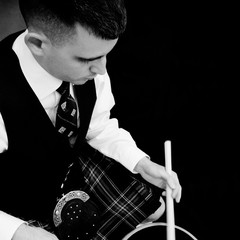 Matthew Bell is a percussionist known for his versatility and high degree of finesse across a broad range of rudimental and folk traditions.

Matt has performed and recorded on the bodhrán with with a host of Celtic musicians including Bonnie Rideout, Jerry O’Sullivan, William Jackson, John Doyle, Cathie Ryan, Liz Carroll, Joanie Madden, Mick Maloney, Brendan Dolan, and Billy McComiskey. He is featured on Billy McComiskey’s Grammy- nominated album, Outside the Box, on Compass Records.

In 2015, he created ContemporaryBodhran.com, an incredibly comprehensive bodhrán educational and retail resource. The site features over 130 video lessons, along with a blog, forums, and an online shop.

Matt launched Rebellion Drums bodhráns in May 2016 in collaboration with three of the world’s finest craftsmen, Christian Hedwitschak (www.bodhranmaker.edu), Stephan Moises (www.tippermaker.de), and Dave Loyal (www.loyaldrums.com). Rebellion Drums bodhráns are the first professional level instruments that are designed to use standard aluminum-collared synthetic drumheads. More info can be found at: www.contemporarybodhran.com/products/

Matt began his Celtic percussion career in 1993 as a member of the City of Washington Pipe Band under the direction of Jonathan Quigg. After several top-five finishes from 1996 to 1998, the band won the Grade 2 World Pipe Band Championships in Glasgow, Scotland in August of 1999. The City of Washington Pipe Band’s Drum Corps were also World Champions that day. The Band was immediately upgraded to Grade 1.

In 2006, Matt was admitted to the Adjudicator’s Panel of the Eastern United States Pipe Band Association. He is a frequent drumming judge at pipe band contests throughout the United States.

Matt most recently competed at the World Pipe Band Championships in 2014 with the Grade 1 Los Angeles Scottish Pipe Band.

Since 2002, Matt has served as a snare drum instrumentalist with the United States Army’s Old Guard Fife and Drum Corps. He has performed hundreds of shows with the Corps over the last twelve years, including the inaugurations of Presidents Bush and Obama. He was selected as the solo timpanist/percussionist for the US Army Historical Trumpets, a specialized chamber ensemble of the Fife and Drum Corps, in October of 2012. Matt is also head of Recruiting and Educational Outreach Programs for Fife and Drum Corps.

Matt holds a Bachelors of Music Degree in Percussion Performance from DePaul University, where his primary teachers were Ted Atkatz and Michael Green.