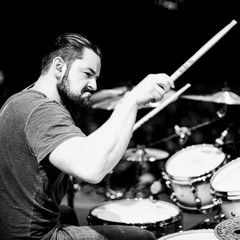 Inspired by his father Greg Garstka (a professional guitar player), Matt Garstka began playing drums at age 8. At age 11, Matt started gigging with his father, playing rock, blues and reggae. By age 14, Matt was playing in Rock, Fusion, Funk, Punk, Latin, Jazz, and Reggae groups. Playing most often with seasoned musicians, Matt quickly developed into a versatile and mature musician. Also at 14, Matt had the chance to meet Jo Sallins who inspired him to become a professional world class musician. He worked tirelessly at his craft, studying all styles of music with the help of Jo Sallins, Greg Garstka and many others.

He soon began doing studio work and started teaching privately. Matt toured several times with Gokh Bi System, an African Hip Hop band during his studies at Berklee College of Music. Matt graduated from Berklee in 2011. He moved to L.A. shortly after to further his musical pursuits. Soon after moving to L.A. he joined the band Animals as Leaders and has been touring with the band internationally.