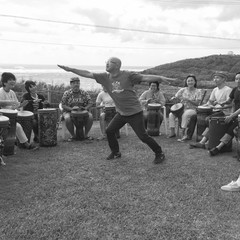 Hashida “Pecker” Masahito has performed for more than forty five years as a professional percussionist. In 1978, he formed “Orquesta Del Sol”, the very first salsa band in Japan and released many albums and singles. Fully cooperated with Bob Marley & the Wailers, he recorded a solo album that was released worldwide in 1980.

In the mean time, mental health care become his major concern and a large part of his work. He advocates “Walking Therapy” as an action to defeat depression and has recorded two CDs on the subject.

In 2002, he first came to know drum circle that was a very new movement in Japan at that time. Since then, he has been a very active and creative facilitator.
In 2004, he became the board chairperson of the Drum Circle Facilitators’ Association (DCFA) and has educated many facilitators. DCFA is the biggest DC facilitators’ association in Japan. More than 200 are the facilitator members and more than 60,000* people experience drum circles facilitated/hosted by its members each year. *Assumed approximately 20,000 in actual.
The association offers seminars/opportunities for members to learn drum circle and facilitation and supports their activities. It holds three annual big event/trainings. “Drum Camp” lasts over fourteen years, “Drum Circles for Teachers” over eleven years, and “Drum Circle Wellness”, which was firstly held in 2015, after five years as “Drum Circle for Therapists”.
The event/trainings were enriched by attendance of many guest DC facilitators from overseas as such as;
Christine Stevens, Arthur Hull, John Fitzgerald, Chalo Eduardo, Paulo Mattioli, Mike DeMenno, Johnny Lee Lane, John Scalici, Kumi Masunaga, Louis Daniel Joly, Kenya S. Masala and Mary Knysh.

As a board chairperson of DCFA, he works with Otomachi*, a consulting section in YMJ that aims to building health community. *Otomachi means “music town” in Japanese. Their clients are local governments, companies and organizations which adopt drumming as an effective communication tool, to solve their social problems.

He has also organized BOS, Beat of Success, and developed “TRAINING BEAT®” which is the training program employees. The program has been highly evaluated and adopted by many major companies as new employee, leadership or team building trainings.