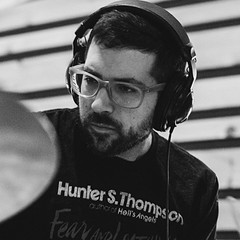 Still in his early thirties, drummer/composer Mark Guiliana, is at the forefront of top drummers in the world for creating an entirely new vernacular on the instrument – blending virtuosic skills on acoustic drums alongside electronic elements and processing. The New York Times recognized Guiliana as “a drummer around whom a cult of admiration has formed.” Guiliana’s prowess, conceptual approach and unmistakable sound were recently featured in Blackstar, the critically and commercially acclaimed final studio recording from the late David Bowie. Over the past decade, Guiliana has recorded and toured around the world with artists including Brad Mehldau, Meshell Ndegeocello, Gretchen Parlato, Avishai Cohen (bass), Matisyahu, Lionel Loueke, and his own groups, Beat Music and the Mark Guiliana Jazz Quartet.

Time Out London sums him up perfectly: “What happens when you add hard bop drum masters Elvin Jones and Art Blakey to a 1980s Roland 808 drum machine, divide the result by J Dilla and then multiply to the power of Squarepusher? Answer: Mark Guiliana