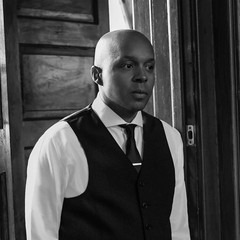 Marcus Baylor is one of the most creative drummers with an unusual ability to tell a story through improvisation. His journey, starting as a child fascinated with drums to becoming a GRAMMY® Nominated artist and producer, has been an impressive one. Born and bred in St. Louis, Marcus first experimented with rhythm on his mother's pots and pans. After getting his first real drum set, he quickly grew into playing at his father's church each Sunday. Heavily influenced by the music around him, Marcus embraced various styles of Gospel, Hip-Hop, Soul/R&B and ultimately Jazz and has crafted an imaginative approach to everything he does. Marcus studied at The New School for Jazz and Contemporary Music under such luminaries as Buster Williams, Michael Carvin, and Lewis Nash, helping to define his skill set on his beloved instrument.

During that time he began touring and recording with jazz icons, Cassandra Wilson and Kenny Garrett and later worked with John Scofield, David Sanborn, and Anita Baker. A defining moment in his career was joining the GRAMMY® Award winning Yellowjackets for 10 years, broadening his musicianship and perfecting his ear for production. Marcus has since transitioned as a founding member and one half of The Baylor Project, along with his wife, Jean Baylor. Marcus has come full circle as a musician, songwriter, producer, bandleader and co-owner of indie label Be A Light and has earned 3 GRAMMY® nominations for The Baylor Project’s debut CD “The Journey” and single “Sit On Down.” Marcus’ passion for music has only grown stronger as he continues his journey to inspire and lift the hearts of people through music.

"Remo drum heads has been a major part of my sound since I started playing drums at the age of two. The versatility and tone of the heads is a key component must have for every studio session and gig I play."  -Marcus Baylor