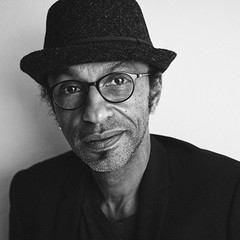 Classical training, Conservatoire National Supérieur de Musique de Paris, originally the musician Manu Katché was promised a noble career as a percussionist in a symphony orchestra. This is probably one of the causes of the “Katché sound” which makes his stroke of the baton widely recognized by experienced music lovers. A wave of the wand that will divert him from classical to lead him to jazz and then to pop-rock. Very quickly we find him, a stage and studio musician, alongside the great French: Goldman , Souchon , Chedid , Catherine Lara , Michel Jonasz, but he owes the explosion of his career to Peter Gabriel who asks him to play the drums for the album "So ”.

Some musicians refuse to be placed in a category, at the risk of disturbing the most timid. It is the privilege of Manu, able to mix all influences and adapt to all styles.

Immediately, the very particular sound of his drums made him spot by the stars of pop-rock and opened the doors to studios and major international stages. So he will record for Joni Mitchell , Sting , Dire Straits , Tears for Fears , The Christians , Robbie Robertson , Joan Armatrading , Paul Young , Tracy Chapman , Youssou N'Dour , Pino Danielle , Simple Minds , Joe Satriani , Richard Wrightwithout sulking for all that his French-speaking comrades since he finds between two Véronique Sanson , Francis Cabrel , Laurent Voulzy , Stephan Eicher , Michel Petrucciani ...

In terms of official recognition, things are going well: first Victoire de la Musique for "Best arrangements" in 86, second Victory in 87 for "Best studio musician"; crowned “Best coming up drummer of the year” the same year by “Modern Drummer”, he won his third Victoire de la Musique in 1996 for the soundtrack of the film “An Indian in the city”. In 1996, it was awarded an award by the Drum Festival of Montreal, then in 2004 it was the turn of our Minister of Culture to register him with the Order of Chevalier des Arts et Lettres. Lastly, his musical creation for the Grévin Museum and soon his wax effigy confirms the notoriety of the authentic character that is Manu Katché.

Hailed, rewarded, as much as an exceptional musician as a talented composer, he never gave up his first love: jazz. Witness the creation of his group "Manu Katché Tendances" in 2004, with which he undertook international tours and his appetite for "Nordic jazz" by Norwegian saxophonist Jan Garbarek with his album, "Neighborhood" in 2005, published by the legendary Manfred Eicher's record company: ECM Records. Still on the album side, the next one, "Playground", was released by ECM / Universal in 2007, "Third Round", released in March 2010 (still by ECM / Universal). Manu's latest opus, simply titled "Manu Katché" was released on October 29, 2012 (ECM / Universal). The trainings are renewed on each tour.

From 2007 to the end of 2010, Manu Katché hosted on Arte "One Shot Not" every Thursday around 11pm. At the end of March 2010, he presented a new program "Musicalities" on France Inter from 10pm to midnight.

In 2012, Manu took over the chopsticks of the anniversary tour of “ So ” with Peter Gabriel. In 2013, he released “Roadbook”, published by Recherches Midi, where he recounts his international career.

In 2014, Manu Katché released “Live in concert” on the ACT label with Jim Watson, Tore Brunborg and Luca Aquino, after a marathon tour of more than 150 concerts around the world.

A new quintet album (with Ellen Andrea Wang on bass) "Unstatic" will be released on March 11, 2016 by Anteprima Productions / Musicast.

He gave his first concert at the Olympia as a leader: Manu Katché & Friends on April 7, 2016 with a host of guests including Sting, Stephan Eicher, Richard Bona, Raul Midon, Noa.

In 2017/2018, he explored the quartet formula by recording “The Scope” with a longtime bass companion: Jérôme Regard (who knows how to adapt to all contexts: jazz, pop, rock… and who has played with Michel Legrand, Jan Garbarek, Louis Winsberg…), guitarist Patrick Manouguian, who accompanies both big names in jazz (Dee Dee Bridgewater, Minino Garay, Didier Lockwood…) and French variety (Bernard Lavilliers, Florent Pagny…) ) and album producer and pianist Elvin Galland