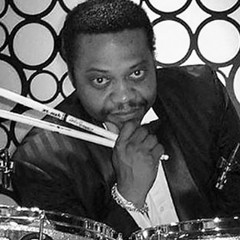 Drummer Land Richards grew up in Muscle Shoals, Alabama and later moved to Houston, Texas. He was born into a musical family—his father being co-writer of the famous hit “When A Man Loves A Woman”—and started performing on drums at age seven, moving on to the local club circuit by age twelve. He studied music formally at Howard University. Over his long career in the music industry, Richards has performed with some of the best-known acts in the world.