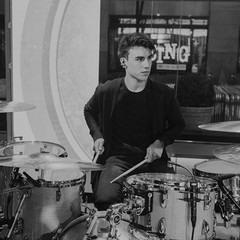 Kevin Smart is a professional musician from New York, NY. He is best known for being the drummer for pop artist Jake Miller (RED MUSIC) and bass player in alternative rock band The Stolen.

Growing up in a musically inclined household, Kevin began playing drums early on and started playing in bands throughout high school. At 17, he began touring with Jake Miller full time all while finishing high school from the road. Since then, he has shared the stage/toured with the biggest names in music including Justin Bieber, Ariana Grande, Fifth Harmony, Shawn Mendes, and more. He has also made countless appearances on award shows/networks including MTV, NBC, FOX, FUSE, Nickelodeon, and more. Having studied with drummers like Chris Stone, David Elitch (The Mars Volta, Justin Timberlake), and Juan Carlito Mendoza, Kevin continues to hone in on his craft. Additionally, Kevin plays bass in The Stolen in which has been featured in Billboard, Alternative Press, MTV, Fuse, and more.