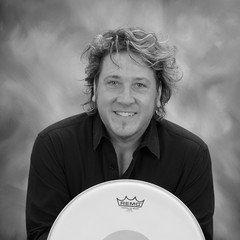 Born and raised in the Detroit area, Keith Dudek began playing drums at age 11 in school band. By high school he was drumming in area rock bands, school jazz band and gigging with a wedding/polka band. Attending Grand Valley State University as a Music Education major, he played in the Big Band and studied under Rupert Kettle. Keith was honored to open up for the Buddy Rich Big Band in 1985. He did session work and live gigs with numerous bands in the area. To improve his drumset chops, he marched three seasons with Madison Scouts Drum & Bugle Corps on Snare. They went on to win the 1988 DCI World Championship and toured Europe.

Focusing on drumset, he began playing for churches, continued doing session work and touring with several regional bands. Over the next 10 years, he had the opportunity to record and tour with Steve Raybine (Smooth Jazz Artist, Bad Kat Records). He toured with Jolie Edwards (DreamWorks and Warner Bros Records) from 1998-2003 which included two USO Tours (Europe and Korea) as well as the Country Gold Festival in Japan.

Pushing his career to the next level, Keith moved to Nashville, TN. It turned to be the right decision. He continues to drum at World Outreach Church and has done several clinics at the PAS TN Day of Percussion and also the 2017 PASIC convention in Indianapolis, IN. He has performed with Little Big Town, Scotty McCreery, Lee Greenwood, Collin Raye, Pam Tillis, Ty Herndon, Jamie O’Neal, Kevin Sharp, Rick Huckaby and Matt Stillwell. While performing with Pam Tillis, Keith traveled to Europe for the 3rd time and played music festivals there. He has performed several times on the Grand Ole Opry with Lee Greenwood.

A Percussive Arts Society member since 1981, Keith was appointed to the PAS Drumset Committee in 2015. In 2016, Keith co-wrote The Orchemental Snare collection with Edward Freytag. He endorses Remo, Mapex/Majestic, Sabian, Promark, Humes&Berg, TreeWorks and RowLoff.