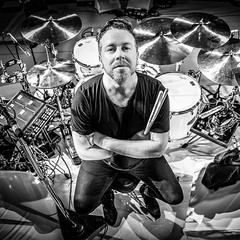 Karl Brazil has fast become one of the busiest drummers from the U.k and is known for his feel and ambidextrous style. This is because Karl plays a right handed setup but is actually left handed and left footed.

Coming from a big musical family, Karl has a wide range of musical influences and was introduced to music from an early age

Apart from travelling the world bashing pots and pans Karl loves nothing more than time with his family, a beer with a few mates and a trip to St. Andrews to watch his Football team Birmingham City.

Karl Brazil is definitely one of THE most in demand drummers in the UK. James Blunt, Robbie Williams, Feeder, Leona Lewis, Natalie Imbruglia, Girls Aloud, Elton John, Westlife, Take That, Jason Mraz and James Morrison are just a few of the top artists Karl is working with in-studio or live. Karl plays drums on the amazing new Feeder Album "Renegades," and will be supporting the band live throughout their packed tour schedule.